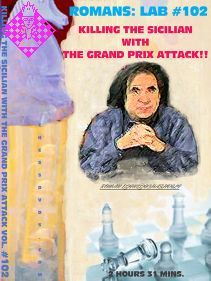 One of the most valuable game collections ever !!

Roman's games contain the most common continuations for Black against the Grand Prix and how to handle them.

Lots of unexpected crashes and devastating results caused by nearly invisible mistakes made by Black.

You will see GM's get lost games just a few moves into the opening.

There are 23 easy to follow games that will surely produce great results in your own games !!!

Roman has covered the Gran Prix attack in several other dvds the difference in this one is Roman brings 23 of his own games. Roman understands this opening better than anyone and explains all the invisible threats that come up all the time as result of Black making what seem like normal moves. What I found amazing is how Roman destroys G.M.'s just a few moves into the opening winning 40% of his games that way and winning another 30% by getting an advantage out of the opening. His games contain lots of different variations which Roman explains in great detail making them easy to understand and remember.

Now if Roman can do this to players at the highest level image what you can do against the average chess player. I am d4 player after watching this dvd I decided to switch to e4 so I can play against the Sicilian. The concepts and ideas are easy to follow even if I don't make the best move I still get good games. How many times have you ever heard anyone say I hope my opponent plays the Sicilian. Now you can look forward beating the Sicilian!!!

Review by The lazy Chess Player