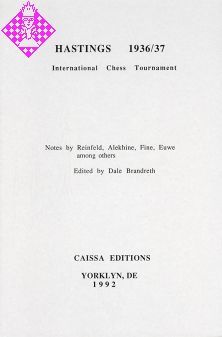 The 1936/37 annual Hastings tournament turned out to a very sporting contest due to the close race between the then ex-World Champion Alekhine and the brilliant young American star Reuben Fine. Fine, as it later turned out, was close to his all-time peak, and from the outset set a blistering pace of seven straight wins. Not only did he win, but he won most games quickly: from Eliskases in 37 moves, from Thomas in 33, Tylor in 28, Feigin in 27, Winter in 51, Menchik in 35, Koltanowski in 43.

Alekhine had a harder struggle. Against Feigin in the first round, he required 95 moves and two adjournments; against Vidmar in a very nice game he took 71 moves against a tenacious defence by the old veteran; against Eliskases a 30-move draw resulted which Alekhine was lucky to not lose; and four easier wins versus Tylor, Winter, Menchik, and Thomas.

So it was that in the next to last round Fine and Alekhine met with Alekhine one-half point behind, but with the white pieces. In a truly masterful game the recently dethroned champion went all out to win against his wily young adversary and carried the day. Fine later annotated the game in detail in his Alekhine memorial article in Chess Review in 1946, calling it "the greatest game I have ever lost". The final round saw both Fine and Alekhine struggling to draw their games with Vidmar and Koltanowski respectively. Both his game with Fine and his game with Vidmar were among those chosen by Alekhine in the second volume of his best games.

I have taken the notes from a variety of contemporary sources and have checked them extensively adding significant changes in several games.

For those who prefer algebraic notation, each game is also given in that form.