How to beat younger players 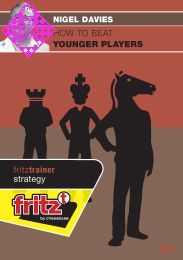 Add the fact that older players often have jobs and families that take most of their time and it's no surprise they suffer painful defeats at the hands of spotty youths. Nigel Davies is no stranger to this situation; a more mature Grandmaster who refuses to grow old with dignity he is still slugging it out with young players in tournaments and matches. On this DVD he argues that an older player withvery little time can nonetheless remain competitive, but only if he uses guile and common sense rather than bluster and machismo. There are several aspects to Davies' plan, for example using 'low maintenance openings', seeking out particular types of position, making the endgame your hunting ground and looking after your health. He goes on to show how several great players have used such techniques to make outstanding results in their 60s and even 70s. Video runnig time: 3 hours.

has been an International Grandmaster since 1993 and is a former British Open Quickplay and U21 Champion. He has had considerable experience in both the Scotch and in teaching club level players.