The store will not work correctly in the case when cookies are disabled.
Artikelnummer
SCOTIVHTCRLAB
Autor
Sergei Tiwjakow

How to combat rare lines as Black 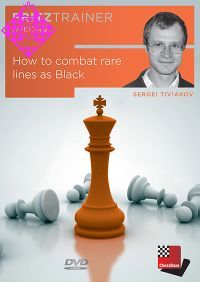 Interactive, communicative and efficient. These are the distinguishing features of the recently developed training format by ChessBase. You are transformed from a spectator into a participant! Answer every one of your trainer’s questions by entering a move. It doesn’t matter whether you score a bullseye or not: your trainer will provide you with feedback. Like that, you assimilate variations and motifs with every move! The author has very often been asked by his students what to do against rarely played lines and openings? This DVD is aimed at answering that question... A complete repertoire for Black is set out to be used against moves such as 1.Nf3, 1.f4, 1.g3, 1.Nc3, 1.b3, 1.b4 and 1.g4. The author uses content from his own notebooks to provide a full explanation of how to proceed. Important chess principles are explained which help the student tackle the unknown! A large part of this DVD is about the Reti Opening - 1.Nf3. Tiviakov explains how to play against it and refers to 2 other DVDs he has produced on the Catalan, the Queen’s Indian and the Nimzo-Indian Defences. The point is to select a reply which corresponds to lines which have already been explained and previously studied; this is in order not to be tricked by an opponent into choosing another move order. This DVD contains lot of material which cannot be found anywhere else, including a large database of almost 1 million games, all the games the author has played against these moves from 1986 are on this DVD as well (half of these games have never been published before) and many annotated games. Together this makes it a complete and indispensable armoury which prepares you to combat rare and side lines as Black. Born 1973 in Krasnodar (Soviet Union), Sergei Tiviakov was a member of the Smyslov school and gained the titles of World Youth Champion at U16 and U18 levels. 1994 he represented Russia in the Chess Olympiads. Since 1997 Tiviakov has been living in Groningen (Netherlands). With his new home country he won the title in the European Teams Championships in both 2001 and 2005 and was victorious in the championship of the Netherlands in 2006 and 2007. Tiviakov celebrated his biggest success in 2008 when he won the European Individual Chess Championship.