Italian Game and the Ruy Lopez 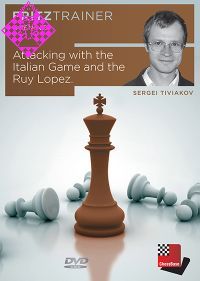 Interactive, communicative and efficient. These are the distinguishing features of the recently developed training format by ChessBase. You are transformed from a spectator into a participant! Answer every one of your trainer’s questions by entering a move. It doesn’t matter whether you score a bullseye or not: your trainer will provide you with feedback. Like that, you assimilate variations and motifs with every move!

The purpose of this DVD is to teach players how to conduct the attack on the black king using different methods. Although the Italian Game and the Ruy Lopez are mostly positional openings, it is very often possible to make use of attacking methods of play. This DVD is based mostly on the personal experience and games of the author, thus making it a unique chess product. The methods described in the DVD are the results of the life-long experience of the author who has played the Ruy Lopez and the Italian Game from his childhood and has scored with it many, many wins, including some against the world’s strongest players. The DVD is divided into 4 chapters according to those attacking methods which have given and still are giving the author the best results. Also several other games by other players (such as A. Karpov, for example) have been added and explained. To complement the instruction, a database is provided which contains all the games which the author has played in the Italian Game and the Ruy Lopez since 1986. A huge number of these games have never been published before. There is also on this DVD a comprehensive database of more than 1 million games played only in the Italian Game and the Ruy Lopez (this database has been compiled from different sources). Other databases of only annotated games and references have been added as well. Everything makes this DVD an excellent comprehensive product for learning how to play the Italian Game and the Ruy Lopez and achieving the best results with these openings!

Born 1973 in Krasnodar (Soviet Union), Sergei Tiviakov was a member of the Smyslov school and gained the titles of World Youth Champion at U16 and U18 levels. 1994 he represented Russia in the Chess Olympiads. Since 1997 Tiviakov has been living in Groningen (Netherlands). With his new home country he won the title in the European Teams Championships in both 2001 and 2005 and was victorious in the championship of the Netherlands in 2006 and 2007. Tiviakov celebrated his biggest success in 2008 when he won the European Individual Chess Championship.