The store will not work correctly in the case when cookies are disabled.
Artikelnummer
LXGILLP1944
Autor
Anthony J. Gillam 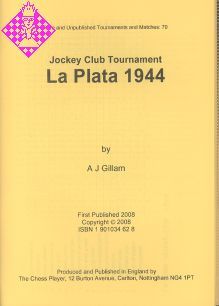 The international tournament of La Plata 1944 was held to celebrate the 73th anniversary of the founding of the town. It was organised and paid for by the Jockey Club of La Plata and was held in their premises, in the paddock of the hippodrome. Play began on November 20th and end on December 18th.

A report on the tournament together with two selections of games appeared in the Argentine chess magazine Caissa in December 1944 and January/March 1945. The other Argentine chess journal of the period, Enroque!!, carried a similar report and a small selection of unannotated games in 1945.

The game scores used in this book were sent to me by Eduardo Bauza Mercere whom I thank.

As expected, the tournament turned into a struggle between Najdorf and Stahlberg. This was a common occurrence in these war-time tournaments and the two players were rumoured not to get on, something that was, perhaps, to be expected between such close competitors. This time Najdorf carne out on top despite losing their individual game, a titanic battle, decided by a brilliant sacrifice by Stahlberg (game 104). As it turned out, the other decisive game of the tournament was Stahlberg's loss to Sonia Graf in the first round, which cost him first place. Graf won four games but was clearly outclassed.

The young Argentine, Julio Bolbochan, did very well to finish in third place. His loss to Illesco (game 105) cost him dear.