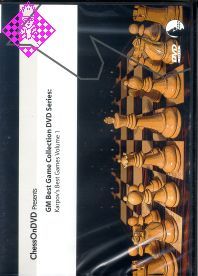 In the first volume of a series of chess videos devoted to his best games, the 12th World Champion GM Anatoly Karpov discusses and analyzes four of his best tournament games of recent times - those against Alexander Khalifman (Reykjavik 1991), Gata Kamsky (Moscow 1992), Alexei Shirov (Biel 1992), and Veselin Topalov (Linares 1994).

This video (and others in the series) provide the viewer with a unique perspective on the thought processes of a World Chess Champion. This volume from the "Karpov Video Collection" is hosted by GM Ron Henley.