The store will not work correctly in the case when cookies are disabled.
Artikelnummer
LXGILLON1892
Autor
Anthony J. Gillam 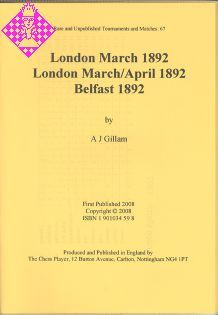 All available games from the two London Tournaments and all the games from Belfast. The two London events made Lasker’s name for him. He won both events with a combined score of 15½ out of 19, with only one loss.

Lasker, Mason, Loman, Bird, Locock, Lee and 6 others played in March. The March/April tournament was a double round event between Lasker, Blackburne, Mason, Gunsberg and Bird. In Belfast, Blackburne and Mason tied ahead of Bird and Lee.

None of these tournaments has previously been published.