G2 - The Opening Theory of Go 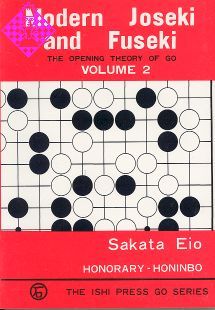 This is the second volume of 'Modern Joseki and Fuseki' and it completes this study of the opening stages of even games. In this volume, the emphasis has become switched more to fuseki. Most classical fuseki are presented here and in addition this book deals with several of the important joseki which were not included in the first volume. This volume taken together with the first volume now comprises a collection of the most important joseki presented for the first time in English.

At present a new work is being prepared which will provide a sequel to these two volumes on fuseki. It will concern the middle game and many of the same games which have been used in this study of joseki and fuseki will be used. Consequently, when this forthcoming book has been finished the reader will have available in three books a collection of thoroughly analyzed games in English.

Regarding this book there are two things I would like to point out. First of all, the Glossary of Japanese Go Terms and their Definitions has been completely revised and corrected. Secondly, an illustrated Joseki Index has been included at the end of this volume. Joseki are shown according to their opening moves and a page reference is given so that readers will be able to use these two volumes as a joseki reference book if they wish.

Finally, I must again express my thanks to the Nihon Ki-in without whose continuing help and encouragement as well as the use of their facilities this book would never have appeared.