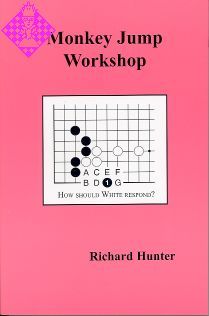 The monkey jump can seem unstoppable to weaker players. One minute Black has a large territory and the next minute White slides in and undermines it. One often sees Black answering wrongly and losing a lot of points or even his whole group. This book provides a systematic coverage of the monkey jump in endgame and life and death situations. Study this book carefully and you should be able to play and respond to the monkey jump with confidence.

The contents are based on a series of articles I wrote for the British Go Journal, and are reprinted here with the permission of the British Go Association. While the journal is read by some people in other countries, the readership is undeniably limited. I'm delighted to have this opportunity to make this material available to a wider audience. I'd like to thank Brian Timmins, who was the editor of the British Go Journal at the time, and his team of helpers for putting my ideas onto paper. I'd also like to thank Matthew Macfadyen for advice and encouragement. Thanks also to Simon Goss for advice on fractional counting. The material in this book includes the complete contents of the BGJ series plus some additional material, practice problems, and game examples. I've corrected one or two minor errors and the material has been completely reformatted. The series was appreciated by readers of the British Go Journal and was also reprinted in translation by the French Go Journal. I hope you find it useful too. I'm extremely grateful to Kiseido Publishing Company for giving me permission to include articles on the monkey jump from Go World, making this book a truly comprehensive coverage of the subject.

This is the second book from Slate & Shell based on my BGJ articles. Already published is Cross-Cut Workshop. Coming soon will be an essential primer on counting liberties.

001 Introduction to the Monkey Jump

019 Timing of Moves in the Monkey Jump Sequence: Examples in Games

073 The Monkey Jump in Life and Death Situations