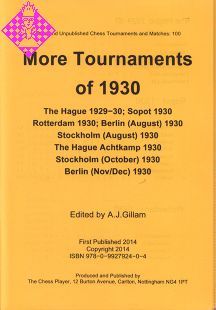 1930 was a very active year in the chess world with a large number tournaments taking place that are worth preserving. The following complete tournaments have been published:

These tournaments have also been published, but are incomplete:

With this book we are now adding another 8 tournaments to the list of published events, 2 complete and 6 incomplete. The only other tournament that we know of that should be published is Antwerp, January 1930. The problem with that event is that currently only 2 of the 15 games are known. The other, outstanding, event of 1930 is the Hamburg Olympiad. There have been three different books of this team tournament: the book by Chalupetzky and Toth (which was later reprinted by the BCM) a book with the games of the Czech team a recent book in Polish.

None of these books aimed to publish a complete collection of the scores. Unfortunately, of the 612 games scheduled (ab out 605 played) onlyl around 315 have so far been found. It is my intention to publish all of those games in a new book, soon.