The store will not work correctly in the case when cookies are disabled.
Artikelnummer
SCSEIMBG
Autor
Yasser Seirawan 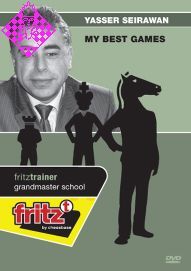 Grandmaster Yasser Seirawan began playing chess in the summer of 1972 and by 1979 he had won the World Junior Championship and in January of 1980 earned his final Grandmaster norm. What had he learned in seven and a half years that propelled him so far so quickly? In this, his first DVD, Yasser takes an engaging in-depth look at 22 games he played from the period 1975-1982, explaining his style, strategy and tactics against Larsen, Gligoric, Kortchnoi, Tal, Timman, Karpov and others. Yasser‘s engaging personality and desire to share his knowledge shines through as does the clarity and the ideas behind his moves. Running time: 5 hours