The store will not work correctly in the case when cookies are disabled.
Artikelnummer
LMNIMMSEQCG
Autor
Aaron Nimzowitsch 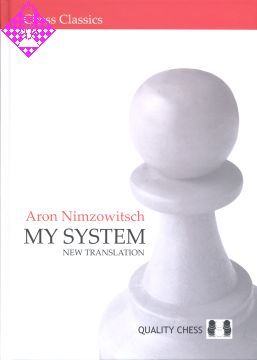 My System is at the top of a very short list of chess classics. Nimzowitsch's ideas have had a profound influence on modern chess thinking. Most chess masters will at some point have studied Nimzowitsch's work, and not to have read My System is by many regarded as a shocking gap in a chess player's education.

The problem for an English-speaking audience has been that My System was written in German more than eighty years ago. The commonly-used contemporary translations have sounded dated for some time, and were always questionable: the translators frequently toned down many passages, fearing Nimzowitsch's biting wit would be too controversial.

This edition uses a brand-new translation that recreates the author's original intentions. For the first time an English-speaking audience can appreciate the true nature of a famous chess book.

Foreword It would be interesting to choose the best chess book from the 20 th century. My System by Aaron Nimzowitsch would certainly be my favourite, and I think this would be a common choice. According to Mikhail Tal, this book is "full of the elixir of chess youth". What are the secrets behind the powerful effect My System has on its readers?

I think that the magical power of this book can be found in the fact that the author managed to be ahead of his time. Already in 1925 he expressed still relevant modern ideas like prophylaxis, pawn activity, and the blockade. The impulse that originated from Nimzowitsch was so immense that the thinking of chess developed in his direction. If you look at the games of Petrosian and Karpov you immediately find the traces of Nimzowitsch's "system". These outstanding chess players developed to perfection the prophylactic style of preventing the opponent's possibilities.

Nimzowitsch's mark is recognisable to some extent in every top player. When I contemplate the later games of Kasparov, I am convinced that many of his decisions are based on purely prophylactic grounds.

Nimzowitsch did not write a simple handbook of opening lines, but a manual of chess. The opinions, ideas, and generalisations that he describes gave rise to a true revolution, whose consequences we can correctly evaluate today.

From the publishers When we decided to publish a new edition of My System our primary intention was to produce an updated translation. The second issue was which source we should use for this translation. We decided on the 2005 Rattman German edition, which contains a number of improvements from previous editions. We also decided to computer-check, within reason, the games in the book. The Rattman edition already had some interesting observations on the original text, which we decided to retain with their corrections in the text or as footnotes on the page (pages 15, 64, 74,76, 84,106, 126, 156) and their references to the editor.

We have also added two small essays at the end of the book. The first is a general discussion about the current relevance of My System; the second contains just over a dozen positions from the book where we think a new opinion might interest the reader. These positions have also been marked with superscript throughout the book.

We would like to thank Yuri Garrett of Caissa Italia for his superb efforts in researching Nimzowitsch's tournament and match results, which are included towards the end of this book as the article "The Chess Career of Aaron Nimzowitsch".

We hope that our new edition of My System will reveal this classic to a new generation of young chess players.

1 The centre and development

017 2 A pawn move must not be considered in itself to be a developing move, but rather simply a move which helps development

020 4 Exchanging followed by a gain of tempo

021 A possible intermezzo between exchanging and gaining a tempo

021 5 Liquidation followed by development or a bid for freedom

024 6 The centre and its urge to demobilise

026 6a Surrendering the centre

028 7 Pawn grabbing in the opening

030 7a Take any central pawn if it can be done without too great a danger!

033 3 The ideal (purpose) behind all operations on a file

034 4 Possible obstacles to operations down a file

037 5 "Restricted" advance on a file in order give it up in favour of another file, or the indirect exploitation of a file - The file as a springboard

042 Schematic illustration of the open file

043 2 Convergent and revolutionary attacks on the 7 th rank

047 3 The drawing mechanism of Rook + Knight

052 Schematic illustration for the 7 th and 8 th ranks

052 Schematic illustration for the 5 special cases

080 3 The main and secondary functions of the blockading piece

081 The effect of the blockade

083 4 The struggle against the blockading piece

092 7 When a passed pawn should advance

092 When can a passed pawn be considered ready to move?

101 Schematic representation for the passed pawn (question and answer session)

103 2 We destroy a defender by exchanging

104 3 We exchange in order not to lose time retreating

105 4 How and where exchanges usually take place

6 The elements of endgame strategy

113 2 The aggressively posted rook as a typical endgame advantage

117 4 The "materialisation" of the abstract concepts: file or rank

119 Schematic illustration of the "endgame" or "the 4 elements"

126 2 The concept of the completely or partially pinned piece

128 The exchanging combination on the pinning square

130 3 The problem of unpinning

143 1 The degree of relationship between the "pin" and the "discovered check" is defined more closely - Where is the best place for the piece which is discovering the check?

1 General remarks and definitions - The base of the pawn chain

149 The idea of two separate battlefields

149 The idea of building a chain

153 3 Attacking the base as a strategic necessity

154 4 Transferring the rules of blockading to the pawn chain

156 5 The concept of a surprise attack compared to that of positional warfare, as applied to chains - The attacker at the parting of the ways!

158 5a The positional struggle, or put simply the slow siege of the unprotected base

1 Prophylaxis and the centre

179 3 My novel conception of positional play as such

183 4 Next to prophylaxis, the idea of the "general mobility" of the pawn mass constitutes one of the main pillars of my teachings on positional play

189 6 What should be the leitmotiv behind true strategy

192 The "surrender of the centre" - a prejudice

201 1 The affinity between "doubled pawns" and "restraint"

203 1a The only true strength of doubled pawns

203 2 A review of the best-known doubled pawn structures

216 5 The different forms of restraint are more clearly explained

217 a) The mobile central pawn

218 b) The struggle against a qualitative majority

220 d) My own special variation and its restraining tendencies

3 The isolated queen's pawn and its descendants

230 2 The isolani as an endgame weakness

232 4 Which cases are favourable to White and which to Black?

240 2 A pawn mass directed by bishops

249 a) Overprotection of the central squares

255 1 What are the logical elements on which manoeuvring against a weakness is based?

The concept of the "pivot", around which manoeuvring takes place.

255 2 The terrain - The rule for manoeuvring * Changing place

256 a) A pawn weakness, which is attacked in turn from the (7 th) rank and from the file

258 3 Combining play on both wings, when for the moment the weaknesses either do not exist or are hidden

Postscript: The history of the revolution in chess from 1911-1914

270 Does "The modern game of chess" by Dr Tarrasch really correspond to the modern conception of the game?

285 The chess career of Aaron Nimzowitsch

303My System in the computer age (or footnotes)

313 Nimzowitsch for the 21 th Century