The store will not work correctly in the case when cookies are disabled.
Artikelnummer
SRODZINAIAD
Autor
Roman Dzindzichashvili 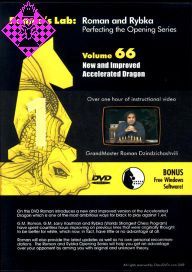 On this DVD Roman introduces a new and improved version of the Accelerated Dragon which is one of the most ambitious ways for black to play against 1 .e4.

GM Roman, GM Larry Kaufman and Rybka (Worlds Strongest Chess Program) have spent countless hours improving on previous lines that were originally thought to be better for white, which now, in fact, have little or no advantage at all.

Roman will also provide the latest updates as well as his own personal recommen­dations. The Roman and Rybka Opening Series will help you get an advantage over your opponent by arming you with original and unknown theory.

Running time: over one hour