The store will not work correctly in the case when cookies are disabled.
Artikelnummer
LN137K
Autor
Jan TimmanDirk Jan ten Geuzendam 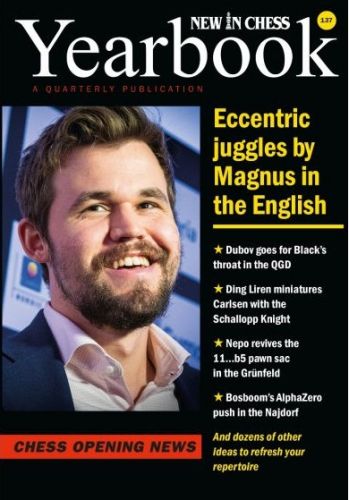 The experiments have continued in the many online events held during the OTB lockdown. That makes excellent Forum material! Han Schut writes about Magnus Carlsen’s 7.g4 in the QGD (it gets played earlier and earlier) and René Olthof was pleasantly surprised by a Vasily Ivanchuk win with the King’s Gambit – an opening on which we also have a Survey, for the first time in ages, by Bogdan Lalic. And be sure not to miss Krishnan Sasikiran’s amazing analysis of a recent correspondence game featuring the Anti-Sveshnikov Sicilian.

This time Erwin l’Ami presents a mixture of standard and non-standard openings. You’ll be surprised to know that From’s Gambit seems to hold up even in correspondence games! That is an encouraging thought for all those gambiteers out there. The Catalan and the QGD are also extensively scrutinized, the latter with a correspondence game by the Dutch GM himself, and he concludes with a study of two nice offbeat openings.

The same juxtaposition as in the Correspondence column can also be found in Glenn Flear’s reviews this time. A Complete Opening Repertoire for Black after 1.e4 e5! by new author Yuriy Krykun (who will be awarded the IM title soon and has also written Surveys for us) features some fresh out-of-the-box ideas, and this is even more so in the case of Unconventional Approaches to Modern Chess Volumes 1 and 2 by Alexander Ipatov, whose middle name seems to be ‘Unorthodox’. More classical approaches can be found in Martyn Kravtsiv’s thorough work The Italian Renaissance (also 2 volumes!) and Squeezing 1.e4 e5: a solid strategic approach by Alexander Khalifman and Sergei Soloviov.