The store will not work correctly in the case when cookies are disabled.
Artikelnummer
LOVIGPTS
Autor
James Vigus 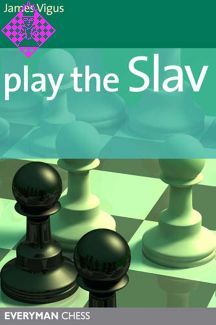 The Slav has a well-deserved reputation as one of Black's strongest answers to 1 d4. It is hugely respected by the top Grandmasters, and it's no coincidence that it has been used by almost all the World Champions in chess history. Put simply, the Slav is a classy opening, one which combines reliability with the promise of dynamic counterplay.

In this book, opening expert James Vigus examines the Slav in detail and presents a comprehensive and trustworthy repertoire for Black. Drawing upon his playing experiences and years of study in this opening, Vigus outlines the main ideas for both sides and highlights the tactics to watch out for, as well as crucial practical issues such as move orders. This book will provide you with enough knowledge and skill to play the Slav with confidence in your own games.

is a FIDE Master and former British Junior Champion. He's a regular book reviewer and contributor to British Chess Magazine . His first book for Everyman Chess, The Pirc in Black and White , has been hailed by reviewers as an outstanding work. Outside of chess, he has completed a PhD in English Literature at Cambridge University.

In his World Championship match with Veselin Topalov in 2006, Vladimir Kramnik played the Slav Defence six times. The Slav had not faced such a test since the Alekhine-Euwe match of 1935, in which both champions relied on it heavily. Kramnik's Slav frustrated Topalov and helped him to win the match, sparking a new fashion for the opening at all levels of play. Studying these games encour­aged me to update the Slav repertoire that I had relied on with Black for the last ten years or so. Like many English players, I first took up the Slav when I read Matthew Sadler's excellent introductory work. Since then, however, only one book (by Graham Burgess) has contributed substantially to Slav theory; so it was necessary to sift through many sources and study the most recent developments, as well as to re-evaluate older games.

The planned update developed into a completely new repertoire, which I pre­sent in this book. Since the Chebanenko Slav {with an early ...a6) has now become an independent and very complex system, I have concentrated solely on the 'pure' Slav, the main line being 1 d4 d5 2 c4 c6 3 Nf3 Nf6 4 Nc3 dxc4 5 a4 Bf5.

For my own use, the repertoire needed to be sound and self-consistent, so that I could use it confidently even against much stronger opposition. Furthermore, I wanted lines whose evaluation is unlikely to fluctuate much as new games are played, so that I can expect to stick with them for years to come. On principle I avoid opening variations that hang by a single tactical thread, because I don't like games to be decided by a memory lapse or by one player's knowledge of last week's novelties. Accordingly, I present my own analysis of some lesser known variations, and in some cases I revive forgotten ideas. Last but not least, a coun­terattacking philosophy is evident throughout this book. The Slav is a solid open­ing, but from a solid basis one can still strive to win, even against an opponent who is keen to split the point. In this respect I have drawn inspiration from one of my favourite players of all time, Ivan Sokolov. His innovative preparation, tactical alertness, and heroic patience are a model for anyone who aspires to play the Slav (and not just the Slav) well. I trust that he will not object to having his name asso­ciated with the variation presented in Chapter One, which he has done more than anyone else to develop.

Working on this book has been a fascinating and enjoyable process, thanks in no small measure to the generous help I have received. Richard Palliser shared his enviable knowledge of the Slav and often pointed me in more promising direc­tions than I might have discovered for myself. The advice and material supplied by John Emms has been invaluable. Simon Bibby not only critically checked much of my analysis and writing, but also alerted me to some useful sources. My mother supported me kindly, especially during the final stages of writing; and Adriana and Romeo provided an ideal place to write during the summer. Cecilia's influ­ence has made the book better and its author saner than would otherwise have been imaginable. Thank you! Finally, I dedicate the book to my team-mates at Schott Jenaer Glas.

I hope that the contents of this book succeed in justifying the imperative of the title: Play the Slav!