The store will not work correctly in the case when cookies are disabled.
Artikelnummer
SCKINPP28E
Autor
Daniel King 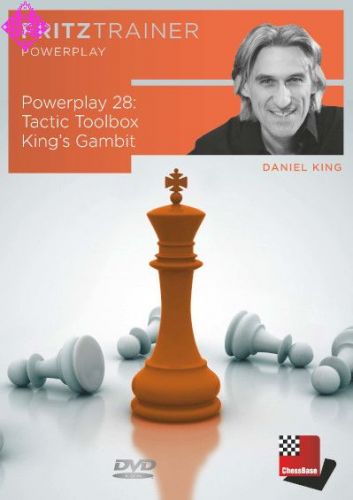 In the King’s Gambit, there is action in the centre right from the start, so tactics play a massive part in the game. Daniel King presents 50 puzzle positions in video format, all arising from the King’s Gambit. They feature typical tactics from the opening, so this is a great way of becoming familiar with the tricks and traps that you can set your opponent Many of the puzzles have been selected on the basis of the repertoire for White that Daniel King recommends in Power Play 27, so you can also use this DVD as a refresher course. Apart from anything else, these puzzles are simply good exercises in calculation. In some of the positions you’ll have to find just one move using the interactive software. In some of the games there will be a follow-up question too. There is also a database of games featuring 101 supplementary puzzles for you to solve.

Daniel King is a Grandmaster from England. He has been a professional chessplayer for over 25 years representing his country on numerous occasions. Acclaimed as a coach, broadcaster, and commentator of major tournaments, he is one of the few professional players able to break down and explain complex concepts. The Power Play DVD series covers openings, middlegames, endgames, strategy and tactics.