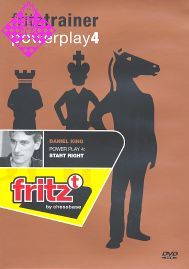 In this day and age of opening databases you might be surprised to find players getting caught out in the opening. Yet one sees it all the time. Players take liberties - they grab a hot pawn, attempt a complicated manoeuvre, or simply develop their pieces inefficiently. Whatever our playing strength, we need to take care in the opening. This DVD will help you to analyse and reassess your opening play so that you can begin the game off the right footing. At the end of the DVD you can test your attacking and defensive skills by examining a series of specially selected test positions. The Power Play series is suitable for anyone looking to improve their chess, but also provides ready-made lessons and exercises for a trainer. Video playing time: 5 hrs 50 min.

The well speaking in two languages ChessBase movie star Grandmaster Daniel King explains you in a small six hours, exactly counted 5 hours and 50 minutes, a fascinating collection of short games and a lot of challenging exercises. In the list of games I found games as Fischer - Fine, New York 1963, Morphy - Hampton, London 1858, Boden - Morphy, London 1858, Morphy - Anderssen Paris 1858. But there are also modern games as Khantuev - Muter, 4NCL 2005, here white did not play in the style of Morphy with his weak 1.e4 c5 2.c3 g6 3.d4 cxd4 4.cxd4 Bg7 5.Nc3 d6 6.Nf3 Nf6 7.h3?! King explains in this DVD that you must try to use the power of every possible move like the great Morphy once did. Interesting is also Svidler - Magnus, Rapid Match Norway 2006, Svidler in his notes to this game in New in Chess believes that he could have drawn but Daniel King waves this all away in this DVD! Other games are Likavsky - Cvitan, France 2000, in this game we learn to be modest and satisfied with a good development with black, Bareev - Topalov, Amber Rapid 2005, Goormachtigh - Velikov, EU-CHT 1989, here you shall find an instructive explanation of the Queen's Gambit accepted. Pleasant to mention is a game from Miles against Farago, Hastings 1976 but also a modern form of the Philidor is covered in Kesseler - Bauer, Bundesliga 2001 and at last the fascinating game Tal - Portisch, Candidates 1965 and the rest of this DVD is filled with exercises still the best way to improve chess skills! The quizzes are pleasantly covered with complete games!Conclusion: Really great trainings material!