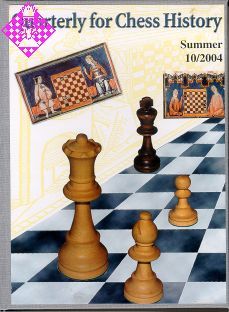 033 F.Marshall in Davenport (by Neil Brenen)

Is Quarterly for Chess History a book or chess magazine seen? It has no ISBN code but if you till these 484 well printed pages it is clear we are dealing here with a chess book which is completely devoted to historical chess research. A major part of this chess research is done by the ambitious Vlastimil Fiala who is starting in this book with a 32 page coverage of the childhood and school years of Oldrich Duras (1882 -1899). Fiala writes that it is sad irony of chess that his name has more or less disappeared from the annals of history and by now, abroad and unfortunately in this country too, there are fewer and fewer chess players who fully realize the importance of his legacy both for Czech and foreign chess. Another 45 page coverage from Fiala goes to part six of Karel Hromadka (1940-1941). Hromadka loved chess and in the year 1940 he attended eight chess tournaments! When you play through the games of Hromadka you get quick an idea from that he was for his time far ahead, for example he played modern moves as 1.e4 c5 2.Nc3 Nc6 3.g3 g6 4.Bg2 Bg7 5.Nh3!? Another superb contribution in this book comes from John S.Hilbert who digs in the history of Henry Thomas Buckle: A life, with chess and the chess games of Henry Thomas Buckle, altogether around 90 pages of excellent chess research. Correspondence chess players will certainly enjoy 'Correspondence play and the growth of chess in Texas a century ago' by the great Neil Brennen. Other not less interesting contributions are Louis van Fliet,Julius Finn, the forgotten tournament of Bradley Beach 1929,Marshall in Davenport, Three Yates matches, A note on notation,Chess problems,Chess research,Chess Reviews etc. Conclusion: A must for every chess book collector!