The store will not work correctly in the case when cookies are disabled.
Artikelnummer
LXFIAQFCH200412
Autor
Vlastimil Fiala 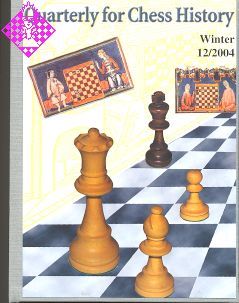 055 Rubinstein in Sweden (by John Donaldson)

Since Quarterly for chess history has been founded at the end of 1999, twelve volumes have been so far published,where the most of them easy pass the 500 pages. So this winter issue 12/2004 with its 443 pages can be considered as a light weight but dear reader it covers some superb. contributions from some of the best chess historians in the world. Under these chess historians you shall find name as Tim Harding who has written in this book a impressive 77 page article on “The British Chess Magazine Correspondence Tournaments,1882-1883 and 1908-1912. Tim Harding went back to school and is doing doctoral research into the history of correspondence chess in the United Kingdom,1824-1914 at the University of Dublin, Trinity College. But there are more readable contributions as Lasker's Last Tournament by K. Croxen, Addition to Steinitz Canon by J. Hilbert, Memories by S. Tartakower, Rubinstein in Sweden by J. Donaldson; Chess Biographies: K Hromadka by V. Fiala, R. J. Loman by O. Urcan, J. Fink by N. Brennen; Forgotten Chess Tournaments: Seattle 1966 by J. Donaldson; Match Lupschitz-Showalter by V. Fiala;Chess Miscellany no.275-300 and interesting written Chess Reviews. For example the contribution from John Donaldson on the US Open in Seattle 1966 good for a lot of unknown games as for example I saw quite some games from Duncan Suttles with his so original way of play,the tournament was by the way won by Robert Bryne and Pal Benko. Included is a interview with Robert Bryne by Burt Hochberg who asks Byrne how he prepares for a tournament; Byrne tells: Actually, I don’t especially for a tournament. However, it is my practice to study all important games and theoretical contemporary games and I pay particular attention to the openings. A other very interesting contribution comes from Olimpiu Urcan “On the sounds of moving pieces Another forgotten blindfold Expert: Rudolf J.Loman {1861-1932 }Rudolf J.Loman was a strong chess player on whom today’s chess history writings shed little light.Found between two nations, British and Dutch, and today claimed by none. Loman was a bridge-builder between the chess societies of the two.This was shown and acknowledged in splendid manner with the occasion of the match between Great Britain and Holland in 1912,with two years before Loman’s return to Holland. Through the book you shall find unknown games from famous players as Alekhine and Lasker usually from simultaneous exhibitions. There is good news too, the chess historian Vlastimil Fiala is working on a monograph focusing on “World history of woman’s chess up to 1944”So far Chess historians are only interested in men chess history and I am glad that Fiala is making this important step. Through the book are around 490 games all well indexed with names of players and ECO openings codes. A very interesting one is the first official game from Dr.S.G.Tartakower taken from the article “How you should not learn to play chess 63 years old chess master looks back on his career”Translated by Feliks Przysuski {Sweden}with permission from Tidskrift für Schack 1950,vol.1-2 {January -February}pages 16-21. [White "Tartakower, Saviely"] [Black "Schenkein, Joachim"]Barmen 1905. 1.e4 c5 2. b4 e6 3. bxc5 Bxc5 4. d4 Bb6 5. f4 Ne7 6. Nf3 d5 7. e5 Nbc6 8. c3 Bd7 9. Bd3 Ng6 10. O-O O-O 11. Kh1 f5 12. Rg1 Rc8 13. g4 fxg4 14. Rxg4 Be8 15.Ng5 Qd7 16. Nxh7 Kxh7 17. Rh4+ Kg8 18. Qh5 Rf5 19. Qh7+ Kf7 20. Rg4 Ke7 21.Bxf5 exf5 22. Ba3+ Kd8 23. Rxg6 Bxg6 24. Qxg6 Nxd4 25. cxd4 Bxd4 26. Nc3 Bxc3 27. Qg5+ Ke8 28. Rg1 d4 29. Qh5+ Qf7 30. Rg6 Qd5+ 31. Kg1 Bb4 32. Rxg7+ 1-0 Tartakower writes about the move 2.b4 This ancient line was nearly always used by me.Later it was adopted by many masters ,among them Marshall and Keres. Conclusion: The Informator for the chess historian!With kind permission of the author John Elburg (www.chessbooks.nl)