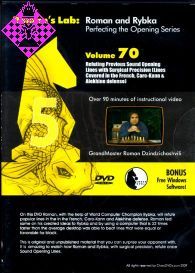 On this DVD Roman, with the help of World Computer Champion Rybka, will refute popular lines in the French, Caro-Kann and Alekhine defense. Roman fed some on his created ideas to Rybka and by using a computer that is 32 times faster than the average desktop was able to beat lines that were equal or favorable for black.

This is original and unpublished material that you can surprise your opponent with. It is amazing to watch how Roman and Rybka, with surgical precision, refute once Sound Opening Lines.