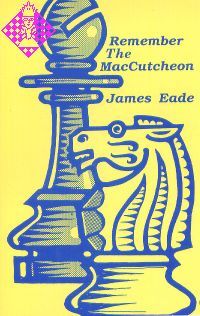 The French holds its position as a principal opening system for Black. The MacCutcheon will give you results at least as good as the Winawer variation with a fraction of the effort. Bobby Fischer said "The MacCutcheon Variation gives rise to immediate complications." If Fischer thought it was complicated, chances are anyone you play will too. Of course, after reading this books you will understand the opening strategy. The author has played the variation for years with success. He has held the Master rating for well over a decade and is an ICCF correspondence Chess Master.

The MacCutcheon is a good sharp opening. You can't tell me any different, although certain people have tried. I've heard it called ugly, strategically unsound or even just plain weak. These people don't know the same opening I know. Perhaps I'd be a little more worried about these criticisms, if I were the only player to ever play the MacCutcheon in an important game. A quick roll call shows that I'm not.

Down through the years, the opening has been played by Capablanca (against Maroczy), Tarrasch (against Lasker), Schlechter (against Marshall), Marshall (in his match against Lasker), Tartakower (against Steiner), Reti (against Bogolubow and Lasker), Alekhine (against Capablance, New York 1924), Keres, Bronstein, Reshesvsky (in their national championships) and Petrosian (against Fischer) to drop just a few names.

If players such as they were willing to use the MacCutcheon against competition like that in events such as those, I guess I can risk it in a weekend swiss. Still, it makes one wonder why, if the opening was once so popular, it has fallen into disuse. What happened? Was it busted? Does chess theory maintain that the MacCutcheon ought to be collecting dust?

I hope to answer these questions by examining current theory and by presenting some examples from current master practice. Obviously, what's fashionable in chess often depends on what the great players of the day are playing. Currently, the only grandmaster that plays the MacCutcheon with any degree of regularity is the Netherlands' Ree.

I choose to look at that as a blessing. It helps my confidence to know that there aren't any TNs floating around that I don't know about. Who wants to open the latest New In Chess only to find their pet variation busted? Or, worse yet, maybe you don't get New In Chess and your next opponent does!

Besides, let's face it, most of us only have so much time to budget for opening preparation. Do you think your opponent will be booked up on the MacCutcheon or on the Winawer? You want to play the Winawer? Go right ahead, but remember to keep current! If you study the MacCutcheon, you'll be reasonably certain of knowing more than your opponent does, and absolutely confident of knowing at least as much.

None of this matters, of course, if the opening gives you a bad game, but who said anything about getting a bad game? Believe me, I hate getting crushed as much as anyone. My experience has led me to conclude that by playing the MacCutcheon, I can almost always get a complicated game. Please note that I'm not promising a better game, only a complicated one.

If you don't like complicated openings with evaluations that end up with an infinity sign or phrases such as "with chances for both sides", close this book. The MacCutcheon is not for you. Perhaps you're one of those Sicilian snobs, who think there's the Sicilian and then there's all those other defenses. Maybe you think that "fighting defense" is merely a euphemism French players use to hide the fact that they get a cramped position and a bad bishop to boot.

I challenge you to play through these games. They certainly aren't perfect, they don't qualify as masterpieces, and it might be stretching the truth to call them brilliant, but they are complicated, hard fought, and very often original. I'll settle for that.

I have come to believe - rightly or wrongly - that I get at least one chance for a "shot" every time I play the MacCutcheon. Sometimes I miss it and sometimes it isn't enough to win, but it is almost always there for me, if I can only find it. (A shot, by my definition, is a sharp, surprising move that causes your opponent to re-evaluate his or her thinking.)

In practical terms, if you can manage a shot in an already complicated position, you can bank on one of the following to occur:

1. Your opponent will pretend he or she wasn't upset by it, move quickly and blunder. (It really does happen.)

2. Your opponent will recover his or her equilibrium, calmly study the position, and make a second rate move anyway. This leaves you ahead on the clock as well as on the board.

3. Your opponent will recover, play the best move, and the game will still be complicated with chances for both sides.

If you had your pick, you might be tempted to choose one of the first two options, but in all honesty, it is option three that leads to the most memorable games. In the final analysis, I believe that what most chess players want, every bit as much as a victory, is a terrific game that they can show to everybody they know.

In any case, all I ask of an opening is to leave me in a complicated position with good piece play in the middle game. I have never felt that chess games should be decided by the relative size of the players' libraries. If you agree with that, then you may want to give the MacCutcheon a try.

Perhaps you're still unsure. Why take my word for it? I'm merely some random national master without any kind of reputation whatsoever. Everyone tells you that you shouldn't trust anyone's analysis unless they are a grandmaster. Some go one better. They say, don't trust a grandmaster's analysis either. Still, this is what some respected chess personalities have written about the MacCutcheon:

Reuben Fine: "White's attack boomerangs here (in what was thought at the time to be the refutation of the MacCutcheon), he is compelled to adopt some more quiet line, but can secure no advantage in that event." The Ideas Behind the Chess Openings.

Larry Evans: "The MacCutcheon Variation gives rise to unusual positions where White is frequently obliged to forfeit the privilege of castling in order to try and wrest an advantage." My 60 Memorable Games.

I. A. Horowitz: "4...Bb4...leads to the interesting MacCutcheon variation. This line offers good tactical possibilities for Black but has some strategic drawbacks." Chess Openings Theory and Practice.

Ken Smith: "Compared to 4...Be7, the MacCutcheon variation results in much more complicated positions which demand exact and concrete calculations." Chess Digest.

Estrin & Panov: "The MacCutcheon variation 4...Bb4 leads to very sharp and complicated play, and was especially popular in the 1930's." CCO.

I can only speak for myself, but if Fischer thought it was complicated, then I think anyone I'm likely to play against will find it complicated too. I find it interesting to note that Fischer faced the MacCutcheon twice (according to Bobby Fischer's Chess Game, Wade & O'Connell, eds.) and had one win and one loss. His loss was to Petrosian and his win found its way into his My 60 Memorable Games.

Furthermore, any opening that was popular in the 30s and unpopular in the 80s is likely to have a certain surprise value. I'm not recommending that you play the MacCutcheon simply for surprise value, but I do believe it helps to increase its effectiveness. Invariably, I've come out of the opening with an advantage on the clock.

I fully realize that I am unqualified to give definitive evaluations of opening positions. I don't intend to! I also realize that I cannot possibly compete with the quality of work of a Minev or Watson. (Where were they when I was learning the French?)

My intention is simply to popularize a currently unpopular variation. If I could look down a row of boards in a tournament one day and see a MacCutcheon for every second Winawer, I'd feel that I'd made a contribution to chess, which is all I could possibly hope for.