The store will not work correctly in the case when cookies are disabled.
Artikelnummer
SRXDZIRSOC2
Autor
Roman Dzindzichashvili

Revisiting the Fundamental Principles of Chess 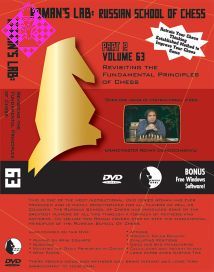 This is one of the most instructional dvds Roman has ever produced and is highly recommended for all players as well as Coaches.

The Russian school of Chess has produced through a formula of methods and patterns some of the greatest players of all time.

Also covered on this DVD: