The store will not work correctly in the case when cookies are disabled.
Artikelnummer
LXDAVSL
Autor
Stephen Davies 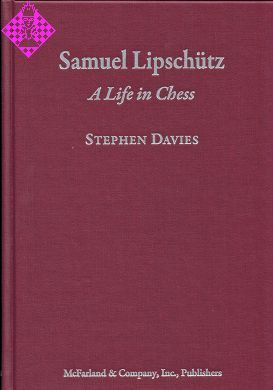 Samuel Lipschütz was born in Hungary in 1863 and emigrated to New York in 1880. He joined the Manhattan and New York chess clubs, and soon became champion of the latter, representing it at the British Chess Association Congress in London in 1886. Naturalized in 1888, he was the highest-placed American in the Sixth American Chess Congress the following year. In 1892 he defeated Jackson Showalter to become American champion. Suffering from tuberculosis in 1895, he lost a championship match to Showalter. Searching for a cure, he went to Germany in 1904 and died there late the following year. This book gives an account of Lipschütz’s chess career, life and milieu and addresses questions surrounding his first name, his periods away from New York and misconceptions concerning the American championship. There are 249 games included.

154 An Excursion to the Midwest