The store will not work correctly in the case when cookies are disabled.
Artikelnummer
LXROMSGK
Autor
Peter RomanovskySergei Tkachenko 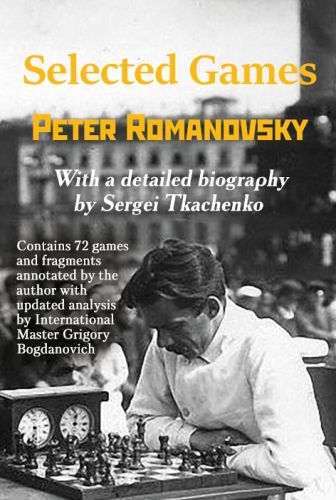 Peter Romanovsky (1892-1964) was Soviet chess champion in 1923 (outright) and 1927 (jointly with Bogatyrchuk). According to Chessmetrics he was ranked 12th in the world in 1925. Romanovsky was also one of Soviet chess’s greatest teachers, standing at the very foundation of the Soviet Chess School. His pupils included Averbakh, Zak, Alatortsev, Lisitsin and many others, and he provided much guidance to Botvinnik in his early career. Author of 16 books, Romanovsky stood for active, fighting and objective chess where the requirements of the position took precedence over positional rules of thumb.

The first half of this book comprises a detailed biography written by chess historian and world chess composition champion Sergei Tkachenko. Tkachenko tells the incredible story of a man who spent nearly a year as a captive in Germany at the start of WWI after participating in the Mannheim chess events of 1914, endured the hardships of Civil War and NEP Russia, won two Soviet championships and lived through the horrors of the Siege of Leningrad in 1941-42, suffering unspeakable family tragedy as he did so. Romanovsky narrowly escaped an early death on three separate occasions.

The second half of this book comprises Romanovsky’s own chess autobiography first published in 1954 in Russian, including 72 of his best games. His instructive annotations have been updated with computer analysis by IM Grigory Bogdanovich, an accomplished historian who published a biography of Bogoljubov in 2020.

Because Romanovsky wrote this book after his career was over, its annotations are considerably more honest than those found in books that collate the annotations of great players made while their career was in full swing. Indeed, in several games Romanovsky comments how his views of certain positions changed over the years as he accumulated greater knowledge and experience.

This book is also a textbook on attacking and positional play. Most games are classified by themes, including Attack on the Castled and Non-Castled King, Counterattack, Attack on the Center, and Queenside Attack. Moreover, it contains discussions on central control, the bishop pair advantage, pawn storms, simplification strategy, exchange sacrifices, king safety, and other key topics.

His opponents include Alekhine, Botvinnik, Bogoljubov, Averbakh, Flohr, Levenfish, Kotov, and many other stars.

006 Part 1. The Biography of Peter Romanovsky, by Sergei Tkachenko

071 Part 2. Pages from My Career – An Autobiographical Sketch, by Peter Romanovsky