The store will not work correctly in the case when cookies are disabled.
Artikelnummer
SCOSHIMBGISPA3
Autor
Alexej Schirow

Shirov, My Best Games in the Spanish - Vol. 3 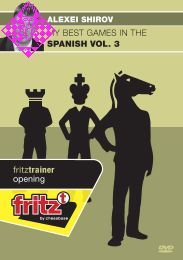 On his third DVD on the Spanish Opening Alexei Shirov pursues new ways, analyzing not only his own games but also the works of other world-class players. In his quest to deal with topical developments and present the latest opening concepts, he examines for example the Jaenisch Gambit (3. ... f5) which wasrevived by Teimour Radjabov on top tournament level. Furthermore, very interesting new ideas are to be found in the games of Gata Kamsky - here the author depicts examples from the Closed Spanish (Breyer System and Saitzev System) as well as the Open Ruy Lopez. As far as his own games are concerned, this time Shirov puts the main emphasis on the accepted Marshall Gambit (more than 2 hours of analysis) - a system which has got him good results recently and which he considers a promising attempt to fi ght this popular opening line. To round off the DVD, there are two videos featuring games with the Anti-Marshall System as well as the Berlin Defence. Total playing time: 5 h 51 m