The ABC of Alekhine 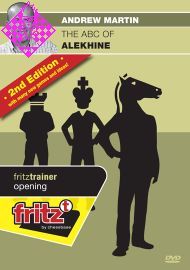 In 2007 we viewed Alekhine's Defence as an excellent opening to play if Black wants to go for the win and four years later this has not changed. If anything, more Grandmasters are using the opening today. Black gets a tough and resilient position with ample opportunity for counterchances.

With 1...Nf6 he immediately throws down the gauntlet to the pawn on e4 and tries to take the initiative from the very first moves. This is a particularly effective game-plan at club level, where knowledge of exact theory is sketchy and where a passive response to immediate aggression is commonplace.

So in the fully updated ABC of the Alekhine, we take a look at how the opening stands in 2011. 1...Nf6 seems to have a bright and enduring future. IM Andrew Martin provides sound, active recommendations for Black, modified if necessary to account for the passing of time and which can be used at all levels of play. To underestimate Alekhine's Defence would be a big mistake indeed!