The store will not work correctly in the case when cookies are disabled.
Artikelnummer
SRXDZIAOD
Autor
Roman Dzindzichashvili

The Art of Defense 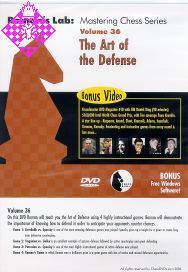 On this DVD Roman will teach you the Art of Defense using 4 highly instructional games. Roman will demonstrate the importance of knowing how to defend in order to anticipate your opponents counter chances.

Game 1: Averbakh vs. Spassky is one of the most amazing defensive games ever played. Spassky gives up a knight for a pawn to create long term defensive counterplay.

Game 2: Vaganian vs. Galko is an excellent example of passive defense followed by active counterplay and great defending.

Game 3: Petrosian vs. Spassky is one of the most highly instructional games of active defense ever played.

Game 4: Roman's Game in which Roman won a brilliancy prize is a great game with lots of tactics and missed defensive opportunities.