The store will not work correctly in the case when cookies are disabled.
Artikelnummer
SCOWELTBAMV
Autor
Loek van Wely

The Botvinnik and Moscow Variation 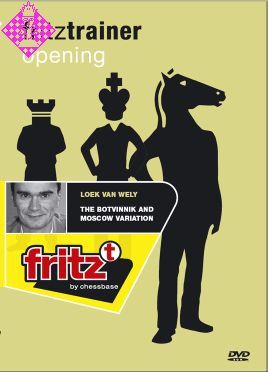 In this DVD, Dutch top grandmaster Loek Van Wely presents both the Botvinnik Variation and the Moscow Variation of the Slav Defence, two extraordinary opening systems excelling by extreme sharpness and complexity. The Botvinnik Variation - 1.d4 d5 2.c4 c6 3.Nc3 Nf6 4.Nf3 e6 5.Bg5 dxc4 6.e4 b5 7.e5 h6 8.Bh4 g5 9.Nxg5 hxg5 10.Bxg5 Nbd7 11.exf6 Bb7 12.g3 c5 13.d5 (D44) – which leads to tactically explosive positions beyond any routine, has been played on highest level with the black pieces by Kasparov, Shirov and Kramnik. Van Wely explains the ideas of this system mainly by means of his own white games, supplemented by games of Ivanchuk, Piket and Bacrot. Also in the Moscow Variation, tactical complications are always on the agenda. The introductory moves 1.d4 d5 2.c4 c6 3.Nc3 Nf6 4.Nf3 e6 5.Bg5 h6 6.Bh4 dxc4 7.e4 g5 8.Bg3 b5 (D43) result in a dynamic position which the six-times Dutch champion employs in practice both with Black and White. All in all, the DVD is a fascinating refl ection of modern, tactical, dynamic chess. Even players who don’t intend to adopt the mentioned systems in their own practice (but who knows?) will doubtlessly extend their chess understanding by Van Wely’s presentation. Video playing time: 5 h 30 min

Born in 1972, Loek van Wely learned chess at the age of 4 and was soon recognized as one of the greatest talents in the Netherlands ever. After becoming Grandmaster in 1993, he steadily climbed up the Elo ladder to reach a peak of 2714 and a place among the top ten in the world in 2001. From the years 2000 to 2005, ‘King Loek’ won the Dutch national championship six time in a row. His reputation as an uncompromising fi gher with a merciless will to win make him a most welcome guest in tournaments all over the world.. Among van Wely’s greatest successes are his triumphs at the Berlin Open in 1991, the World Open in Philadelphia in 1992 and the New York Open in 1995. In 2005, he was the top board of the victorious Dutch team at the European team championship in Gothenburg.

The Dutch crack GM Loek van Wely digs in this Fritztrainer opening DVD in to the Botvinnik and Moscow variation, which run after the moves 1.d4 d5 2.c4 c6 3.Nc3 Nf6 4.Nf3 e6 5.Bg5 dxc4 6.e4 b5 7.e5 h6 8.Bh4 g5 9.Nxg5 hxg5 10.Bxg5 Nbd7 11.exf6 Bb7 12.g3 c5 13.d5 and 1.d4 d5 2.c4 c6 3.Nc3 Nf6 4.Nf3 e6 5.Bg5 h6 6.Bh4 dxc4 7.e4 g5 8.Bg3 b5 and are known under the ECO codes D43 and D44. Steffen Pedersen once wrote in his detailed study on the Botvinnik-Slav: And is in my opinion one of the most complex of all opening variations. These openings DVD are nice things; not only you can learn to play and understand a openings but they are also very useful for all the extra tips between the lines. Personally I see them as excellent trainings sections esspecially with analyses from top players as Shirov and Van Wely. Van Wely is very honest in his own games and I consider the material on this DVD as very instructive, for example his game against Shabalov where he even discusses all kind of other things that belong to a game of chess even game fixing. The running time is around 5 hour and 30 minutes. Conclusion: Buy it for the excellent notes!