The store will not work correctly in the case when cookies are disabled.
Artikelnummer
LXBRETCSOFO
Autor
Oystein Brekke

The Chess Saga of Fridrik Ólafsson 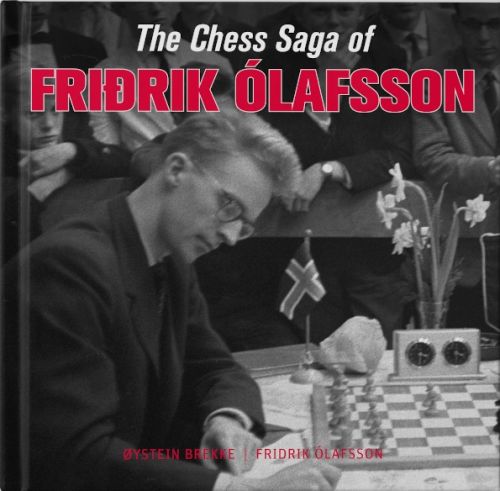 Chess grandmaster Fridrik Olafsson was the World championship candidate who became a national hero at home in Iceland and later President of the World Chess Federation, FIDE. This book follows his career with 114 games plus 4 game finishes, most of them played against leading grandmasters of several grandmasters, from the legendary Savielly Tartakower in 1954 to David Navara in 2013.

The core of this book are 50 games which Fridrik presented and annotated for his Icelandic games collection back in 1976.

At long last Fridrik Olafsson's chess career, with commentaries to many of his best and instructive attacking games, is available in English. Jan Timman wrote: "With his unorthodox and enterprising style he posed a threat to all top players, including the Soviet elite."

Among his defeated opponents in this book are World Champions Petrosian, Tal, Fischer and Karpov, and lots of the world's other strongest players.

The book kindly has a foreword by the President of Iceland, Gudni Th. Johannesson, and also an introduction by Gudmundur G. Thorarinsson, who was chief organizer of the World Championship match 1972 in Reykjavik, and also President of the Icelandic Chess Federation for ten years.

From the Foreword by President of Iceland Gudni Th. Johannesson:

"Throughout his career, Fridrik Olafsson carried the reputation of his nation around the world. He gained renown for his brilliance at the chessboard, and equally for his refinement and elegance. Thus, Fridrik won the respect and admiration of all Icelanders, as well as vast numbers of chess fans internationally."

From the Preface by Oystein Brekke:

Fridrik Olafsson may be the strongest chess player of the 20th century about whom until now no book existed in any of the big languages. It feels great to present to the world this first book outside Iceland about the chess career of their first and most prominent grandmaster.

During 25 years from about 1955 to 1980 he was one of the world's ten to fifty best players, in spite of coming from remote Iceland and in spite of giving priority also to this studies, his job, his family, and being elected President of FIDE.

Fridrik Olafsson has had a personal attacking style which you may study and admire in this book, with more than 50 games explained by Fridrik himself.

The platform of the book is Fridrik's own Icelandic games collection from 1976 "Vid skakbordid i aldarfjördung - 50 valdar soknar skakir" (At the chess board for a quarter of century - 50 selected chess games).

Another appropriate name to that book might have been "50 Attacking Games". There are many lessons to be learnt here about both how to build an attack and how to carry it out.

The work on an English Edition started in Reykjavik 2009 when Fridrik presented to Gunnar Finnlaugsson the handwritten manuscript with a translation of his Icelandic book, made by the late Icelandic chess player and English teacher Björn Johannesson.

Gunnar - an Icelander living in Sweden - later got exclusive game commentaries to this book from grandmasters Tiger Hillarp Persson, Axel Smith, Ian Rogers and Yasser Seirawan, and was permitted to use annotations from Margeir Pétursson, Johann Hjartarson and Jan Timman.

Later he asked Oystein Brekke to take over the book project.

The authors in short:

Fridrik Olafsson was born January 26th 1935 in Reykjavik where he still lives. He was Nordic Champion in 1953, at 18, and won his first grandmaster tournament at Hastings 1955/56, shared with Korchnoi and ahead of Taimanov. A World Championship candidate 1958-59. President of FIDE 1978-82. Besides his great chess career, he is a lawyer, and was for 21 years Secretary General of the Icelandic parliament, Althingi.

Oystein Brekke was born in 1956 and is a Norwegian chess player, organizer, arbiter, trainer, historian, author and publisher. His several books in Norwegian language are elementary books and chess historic works. He was editor of the Norwegian chess magazine "Norsk Sjakkblad" from 1975 and Secretary General of the Norwegian Chess Federation 1982-88.

The career of the famous Icelandic grandmaster is described through 10 chapters and 70 years, starting from his first tournament in 1946 and up to his last championship participation in 2016. 52 of the games are presented and annotated by Fridrik \'d3lafsson himself. The book also has 115 photos, and quite many of them not published before.

Two of the games in the book are wins against Tal (one of them very brilliant), two wins against Fischer, two against Petrosian and one against Karpov. That was in Buenos Aires 1980 when it happened that the FIDE President beat the reigning World champion.

285 Index of opponents, photos and illustrations