The store will not work correctly in the case when cookies are disabled.
Artikelnummer
LOGIRTDS
Autor
Anish Giri

A Take-No-Prisoners Repertoire vs. 1.e4 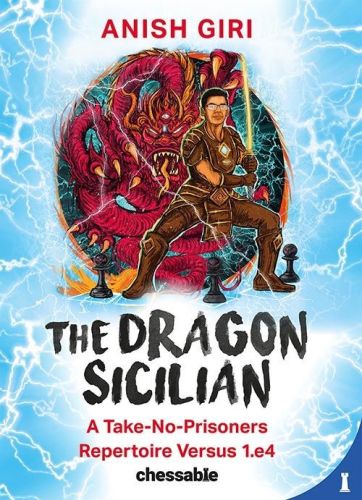 The Dragon Sicilian is the perfect choice for club players searching for chaotic and imbalanced positions. This opening manual shows how Black can turn up the heat against 1.e4, and enjoy dynamic winning chances game after game.

Top-10 player Anish Giri is the best tutor to bring this complicated opening across to 'everyday' club players. Anish serves up his super-GM lines and clearly explains the ideas and strategies behind the moves. So when game time comes, you know exactly which moves to play, at what moment, and how to deliver the knockout blow.

Make no mistake: This repertoire's "take-no-prisoners"-strategy means you will sometimes reach razor-sharp positions, where both sides must play 'only moves'. But that's why you'll love having Anish Giri as your opening coach. Giri delivers just the right mix of cutting-edge analysis and practical guidance for players of all levels with his trademark witty and down-to-earth teaching style.

The Dragon Sicilian also covers all other major systems Black could face, including what to play against Anti-Sicilians such as the Rossolimo, the 2.c3 Alapin, and the Grand-Prix Attack.

Grandmaster and world top-10 player Anish Giri is one of today’s most popular chess players. He has an active Twitter account, a massive YouTube channel, and is a regular contributor to New In Chess magazine. Giri has Russian, Nepalese, and Indian ancestry. He lived in Russia and Japan before his family settled in the Netherlands. His opening preparation is one of his strongest suits, and Giri is often referred to as the most prominent theory expert in the world.