The store will not work correctly in the case when cookies are disabled.
Artikelnummer
LOWAHTMS
Autor
Matthias WahlsKarsten MüllerHannes Langrock 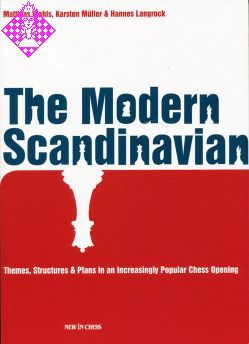 Matthias Wahls's 'Modernes Skandinavisch 1' was a huge suc­cess when it was published in Germany in 1997. Wahls's book contributed to the growing popularity of the Scandinavian (or Center Counter-) Defence as a solid weapon. The Scandinavian is especially practical for black players who don't want to learn too much theory and who don't want to be dependent on White's choices.

The Modern Scandinavian is an updated and expanded transla­tion of 'Modernes Skandinavisch 2', which appeared in 2006 and also became a bestseller (please see article no. LOWAHMS and LOWAHMS2). This second book focuses not on theoretical lines but on the structural ideas after the moves 1.e4 d5 2.exd5 Qxd5 3.Nc3 Qa5.

The original edition of The Modern Scandinavian has acquired cult status among chess aficionados. Some have even con­fessed to have learned German in order to be able to read it! This is no longer necessary, and this new edition will stand for many years, since it is about structures, not about the latest fashions.

010 Preface to the English Edition