The store will not work correctly in the case when cookies are disabled.
Artikelnummer
LMNESTPOD
Autor
Nikola NestorovicDejan Nestorovic

The Power of Defence

and the Art of Counterattack in 64 Pictures 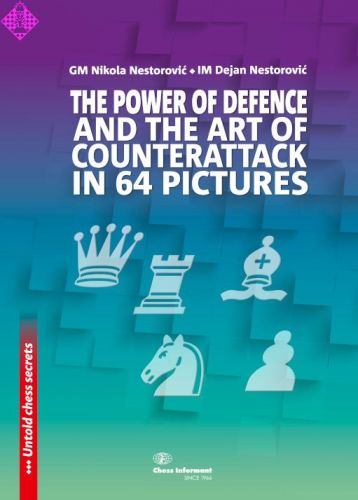 A tale of 64 magical squares in 64 shrewdly created pictures. Many a book delved deep into the vast oceans of tactics, positional play and strategy, but very few dared to enter and master a notoriously elusive realm of defence in chess.

In this highly instructive tome the authors tried to accomplish several demanding goals. To uncover many of the secrets that remain hidden so very often, to tackle the most difficult area of chess skill - defence, and finally to teach a great number of ambitious chess-players helping them to improve their knowledge in this important area of chess expertise.

We present you the book by GM Nikola Nestorovic, and his father IM Dejan Nestorovic with firm belief that you will appreciate many hours of their hard work and devotion to this intriguing topic. The games presented in this tome are both recent and older ones, played by the chess elite and their lower rated peers, but without exception instructive, deeply and diligently analysed for your reading and learning pleasure.

You learned to attack - now it is time to sharpen your defensive tools!

005 A Word from the Authors

121 The knights of XXI century