The store will not work correctly in the case when cookies are disabled.
Artikelnummer
LOEMMTSIC2ND
Autor
John Emms 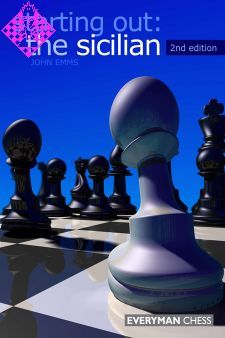 This is an updated and largely expanded edition of Starting Out: The Sicilian , the highly acclaimed guide to the most popular and famous opening in chess. In this user-friendly book, Grandmaster John Emms goes back to basics, studying the fundamental principles of the Sicilian Defence and its many variations. Throughout the book there are an abundance of notes, tips, warnings and exercises to help the improving player, while key strategies, ideas and tactics for both sides are clearly illustrated.

The greatest attraction of the Sicilian is that it allows Black to unbalance the position and play for a win, without having to take any unjustified risks. Its many variations range from the super-solid Scheveningen to the dangerous and ultra-sharp Dragon. For those playing Black it should be easy to find one that suits your style, while those playing White can choose from the range of options given against each line.

John Emms is one of the UK's leading Grandmasters and has captained the English Team at two Chess Olympiads. He's an experienced coach who has worked with many top players, including World Championship finalist Michael Adams. He's also a highly respected writer; previous works for Everyman Chess include Discovering Chess Openings and The Survival Guide to Competitive Chess .

Introduction It's probably safe to say that the Sicilian Defence is the most famous chess opening of all time. It's certainly the most popular: almost a quarter of all games in chess are Sicilian Defences. This is a pretty large fraction considering the large pool of openings from which each player can choose. If you play 1 e4, the likelihood of facing a Sicilian Defence is just below fifty percent.

Why the immense popularity? The easiest way to address this question is to take a look at some simple opening positions.

1 e4 is one of the two most popular opening moves for White (the other is 1 d4). With 1 e4 White gains control of some central squares and opens lines of development for his queen and f1-bishop. Give White another free move and what would he like to play? The answer of course is 2 d4!, controlling more central squares and opening further lines of development. With control of the cen­tre and open lines for easy development, White is already assured of a good position from the opening moves.

Black has many possible replies to 1 e4, but only two of these both gain a foothold in the centre and dissuade White from carrying out his 'threat'. These two moves are 1...e5 (symmetrical king's pawn) and 1...c5 (the Sicilian). It's no coincidence that these are the two most popular defences to 1 e4, but what is interesting is that at most levels the Sicilian occurs twice as often as 1...e5. Why should that be the case?

Black has taken control of the crucial d4-square and is ready to answer d2-d4 with ...cxd4, thus eliminating one of White's central pawns and lessening White's control of the centre. The 'advantage' the Sicilian has over, say, 1...e5 is that Black is able to unbalance the position with an asymmetrical pawn structure from an early stage. This allows both sides the opportunity to play for a win from the very start, White is less likely to acquire a 'risk free' edge because the position will always contain some imbalance.

Pawn Structures Two-thirds of this book deals with 'Open Sicilian' positions, in which White plays 2 Nf3 followed by 3 d4. This is by far the most common way for White to meet the Sicilian. White opens more lines for his pieces and attempts to exploit the fact that he will be ahead in development.

Let's take a look at the possible opening moves 1 e4 c5 2 Nf3 d6 3 d4 cxd4. White is up in development and can move his pieces more freely. Black, however, has a structural advantage of an extra central pawn, which gives him long-term chances of taking control of the centre. A typical imbalance has arisen. The onus is on White to exploit his lead in development in order to secure an early initiative. If White plays passively or his initiative runs out of steam, then typically it's Black, with the better pawn structure, who enjoys the long-term chances. Thus it's quite rare for a state of 'dull equality' to arise. Often in the Sicil­ian, if Black 'equalizes', he is already slightly better! This structural advantage is seen in most Open Sicilian lines: for example, the Dragon, the Najdorf, the Scheveningen and the Classical Variations. The major exception to this rule is the Sveshnikov Variation, in which Black accepts pawn weaknesses in return for ac­tivity.

Sicilian Variations A few words on how this book is set out. In the first five chapters we shall be tak­ing a look at the most popular variations of the Open Sicilian: the Dragon, the Na­jdorf, the Scheveningen, the Sveshnikov and the Classical. There are naturally many similar characteristics to these lines but they all contain their own distinc­tive flavour. In Chapter 6 we move on to slightly less common variations of the Open Sicilian: the Taimanov, the Four Knights, the Kan, the Accelerated Dragon and the Kalashnikov. In Chapters 7-9 we study lines in which White avoids the complexities of the Open Sicilian: Bb5 systems (Chapter 7); the c3 Sicilian (Chapter 8); and finally the Closed Sicilian, the Grand Prix Attack, the Morra Gambit and unusual lines (Chapter 9).

About the Second Edition

First of all I should stress that this is still a Starting Out book, and as such I hope it will appeal to a similar audience to those who read the first edition published in 2002. However, in this second edition I have taken the opportunity to cover the Sicilian more deeply, expanding on both the ideas and the theory, and widening the coverage to include new developments (one example is the Dragadorf Varia­tion, see Game 5) as well as less common lines which didn't make the first edition. So in effect, as well as Starting Out, there is also some degree of 'following on'. I've updated and expanded both the section introductions and the illustrative games from the first edition. I've also added over 20 new games, virtually all of which were played in the new millennium. In general I've chosen the games to illustrate some of the more entertaining and instructive Sicilian battles over the years, not always necessarily those which reflect the current state of theory (this task is sometimes confined to the notes of games and section introductions).

All in all, the additions and amendments have resulted in a considerably bigger book, one that's almost twice the size (in the number of words) of the first edition. Of course in this day and age, whatever the size, a single publication on the Sicil­ian could never hope to provide comprehensive coverage - far from it when you consider whole books have been devoted to a single sub-variation of the Sicilian! What I've aimed to do is to concentrate on the most popular lines - both modern day and historically - and those which a newcomer to the Sicilian is most likely to face. As I stressed in the first edition, more than anything this book aims to be an introduction to the main lines and ideas of the Sicilian, and to help readers choose variations they think will suit their style. I hope this book achieves its objective.

The only thing remaining is to wish you the best of luck in your Sicilian adven­tures!