The store will not work correctly in the case when cookies are disabled.
Artikelnummer
SCODAVTVW3F4
Autor
Nigel Davies

The Vienna with 3.f4 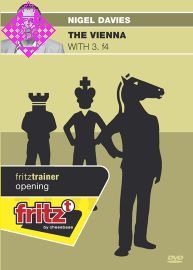 The Vienna with 3.f4 is a very dangerous way for White to open the game yet it has been almost ignored for almost a century. Yet recently there have been signs that that this is about to change with adventurous Grandmasters such as Nakamura, Ivanchuk, Zviagintsev and Hector playing it with deadly effect. On this DVD Nigel Davies argues that the Vienna is a great choice for players of every level, providing surprise value to top Grandmasters whilst provoking fearful and passive reactions amongst players at club level. Besides its great surprise value the fact that the 3.f4 Vienna has not been heavily analysed makes it difficult for Black to have a safe line. Another plus from White's point of view is that there is plenty of scope for creativity, finding and developing your own ideas. Besides the traditional lines such as 1.e4 e5 2.Nc3 Nf6 3.f4 d5 4.fxe5 Nxe4 and 1.e4 e5 2.Nc3 Nc6 3.f4 exf4 4.Nf3 g5 5.h4 g4 6.Ng5 h6 7.Nxf7, Davies examines modern treatments such as 1.e4 e5 2.Nc3 Nf6 3.f4 d5 4.exd5 and 1.e4 e5 2.Nc3 Nc6 3.f4 exf4 4.Nf3 g5 5.d4 d6 6.d5!?. He also shows why many of the typical reactions at club level are bad.

has been an International Grandmaster since 1993 and is a former British Open Quickplay and U21 Champion. Besides his playing accomplishments he is an experienced chess coach with an ability to explain chess ideas players of any level. He is an acknowledged expert on 1.g3 having played it on numerous occasions in his own games.