The store will not work correctly in the case when cookies are disabled.
Artikelnummer
SRODZITAPLAG
Autor
Roman Dzindzichashvili 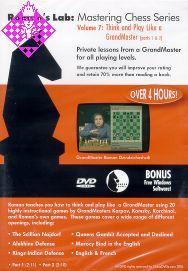 Roman teaches you how to think and play like a GrandMaster using 20 highly instructional games by GrandMasters Karpov, Kamsky, Korchnoi, and Roman´s own games. These games cover a wide range of different openings, including:

Thinking and playing like a Grandmaster is something we'd all like to do, but how exactly should one set about such a task?

Over the course of over four hours, Roman analyses a plethora of games by top Grandmasters applying particular emphasis on the opening stages of the game.

In the introduction, Roman explains that for a player of any rating, the important thing is to maximise one's own knowledge and to adopt the thinking methods of the great players. He goes on to say that he has chosen the games he understands the best, whether they are his own efforts or of strong players he has worked with. His credentials to use this criteria are very strong; he was worked with the likes of Karpov, Korchnoy and Kamsky. The presentation of material is very good. The screen is split, with Roman playing through the moves on a real chess board, while speaking to the camera, on the right hand side and there's a digital demonstration board on the left hand side. He is not afraid to show simple, one-move variations among the more detailed and deep analysis but never talks down to the viewer. This makes the DVDs suitable for players of all standards.

The first three illustrative games feature GM Karpov in his best positional style. The first shows him eventually invading a weak e6 square against an Alekhine Defence, the second is his classic Maroczy Bind versus GM Kavalek and this is followed by a lesser known game against GM Mecking (Hastings 1971-2).

The explanations from start to finish are extremely instructive . GM Karpov's games are deceptively tricky; just try guessing his moves and it will become apparent that his outwardly simplistic style is actually very hard to mimic. Roman's common sense commentary sheds a lot of light on the great champions mysterious methods.

Following a master class on Karpov's best positional style, Roman then puts one of GM Korchnoy's games under the microscope.

Part 2 continues in the same style, and adds some games by GM Kamsky to the list of 'Special Ks'.

Sensible guidelines abound, helping the viewer to assess, plan and successfully handle a plethora of positions. Roman offers constant reminders to be on guard for tactical refutations of sloppy and inaccurate play. There's just under four and a half hours of (virtually) private tuition from a very experienced Grandmaster on this impressive DVD. If you don't learn a lot from it then frankly you can't be trying.