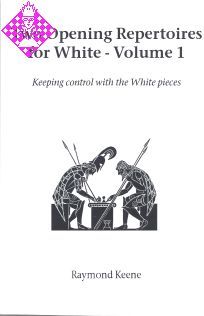 An ideal book for any chess player with a strategic frame of mind who wishes to carve out an openings repertoire based on 1d4! The author gives a number of illustrative games in all key lines which show how White can maintain control against any Black defence. If you want to stay in charge in the opening without taking risks this is the book for you!

Originally published as An Opening Repertoire for White in 1984, the companion volume is Two Opening Repertoires for White: Volume 2 - Aggressive plans for White, which continues with key lines from volume 1, adding extra analysis and comment, as well as introducing some entirely new variations, which will be to the taste of the attacking player.

The aim of this book is to provide a complete repertoire for the White player, based on the move 1 d4. In analysing the material I have chosen to develop from 1 d4, I have maintained several crucial principles: one main line is demonstrated for White against all of the major Black defences which the White player is likely to meet in competition; the main lines selected are sound but aggressive and do not rely on memorisation of long tactical variations and sub-variations. In several cases, they embody newly elaborated, relatively unexplored ideas which allow plenty of scope for individual creative contribution on the part of the reader. Furthermore, I have based each suggested line on annotated illustrative games, so that the strategies outlined and attacking methods proposed can be fully absorbed, right up until the endgame phase.

Advantages of a Repertoire

There is no need to feel concern at limiting oneself to an opening repertoire. All chess players have restricted time and resources at their disposal, and this is particularly true of social, club, league or weekend competitors. In view of such constraints it makes excellent sense to work out a tangible, fixed group of opening variations in which to carry out a specialised study. Once the reader feels thoroughly at home with this, it will provide a firm platform for branching out and acquiring new knowledge and expertise in other, broader areas of chess science.

It should not be forgotten that even such great players as Fischer and Karpov have had their own selective repertoire, centred largely on 1 e4, while Viktor Korchnoi and Gary Kasparov strongly favour openings arising from 1 d4. A curious fact, in this context, is that of the twenty games played in the World Championship semi-final at London 1983, in the matches between Smyslov and Rjbli and between Korchnoi and Kasparov, no less than nineteen commenced 1 d4!

1 d4 is a sound, solid move, aiming for central control and a restrained but ultimately convincing attacking build-up. It does not lend itself to premature adventures and in general, by opening with it, you can avoid colliding with too many devastating surprises from your opponents.

ORW(An Opening Repertoire for White) is designed to give the reader confidence and ideas for the practical struggle. As I have already stated, this is essentially a book of strategies, not an exhaustive reference work. I have, therefore, taken the step of linking each variation analysed with the related section in Batsford Chess Openings (BCO). This one-volume openings encyclopaedia, written by Gary Kasparov and myself, provides a vast amount of detailed background information. It is a useful companion to ORW, and one that will form a handy compact compendium, both for expanding the repertoire beyond the confines of the lines I have examined here and for last-minute revision before and during tournaments or important games. Good luck with improving your chess and your scores!