The store will not work correctly in the case when cookies are disabled.
Artikelnummer
LONEIWITO
Autor
Jakow Neistadt

Win in the Opening! 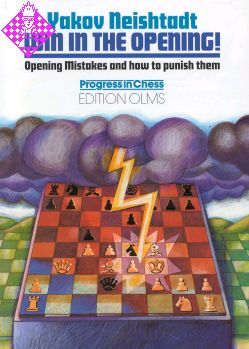 To loose a game of chess in the opening or the early middlegame is especially annoying, although this is something that happens not only to noviced, but also to experienced masters. A player who possesses a knowledge of opening disasters can hope for some quick and pretty victories, and it will also spare his nerves, if the opponent should wildly attack. Yakov Neihstadt is an experienced Russian author now living in Israel, whose books have been published in a dozen countries around the world.

To lose a game of chess in the opening or the early middlegame is especially annoying. However, this is something that happens not only to novices, but also to experienced masters.

A knowledge of opening disasters and of the correct replies to sharp continuations is imperative, if a player is to master this difficult phase of the game, in which much is still shrouded in mist.

Time and again unexpected combinative themes occur, striking the opponent like a bolt from the blue. A player who has studied the material here can hope for some quick and pretty victories, and it will also spare his nerves, if the opponent should wildly attack.

With its clear explanations and recommendations, this book provides an excellent grounding in chess opening theory.

Combinative themes: diversion and decoy. Diversion and the "windmill". Decoy and blocking.

Combinative themes: release from a pin, defence-elimination, vacating of a square (or line), isolation and interference, destruction of the king`s pawn screen. Promotion of a pawn. Mixtures of combinative ideas.

The calculation of variations and the evaluation of a position. The intermediate move. The principles of opening play: rules and exceptions. Time in chess. How tempi are gained and lost. Seizing the initiative. The danger of losing the right to castle.

Ways of speeding up development. The pawn sacrifice for the initiative. 'To take or not to take?'. 'Pawn-grabbing' - a dangerous disease. Theoretical gambit variations. The opening catastrophe after a strategic mistake. The employment of gambits by Black. Jusitfied and unjustified risk.

Lasker`s double bishop sacrifice on h7 and g7. The calculation of an operation and the final aim. When one does begrudge the queen: the Legall theme and the Réti combination.

The off-side queen, shutting it out of play, followed by an aatack with superior forces. Typical mating constructions: with bishop and knight, queen and bishop, two bishops, rook and knight.

Take care off the queen! Opening erudition and creativity. 'Knowledge is strength!' Trust, but verify.

Beware, a trap! Deceptive gains. Under fear of punishment. Without any risk. The probabillity of success.