The store will not work correctly in the case when cookies are disabled.
Artikelnummer
LXGORAYITCW
Autor
Danny Gormally

A year inside the chess world 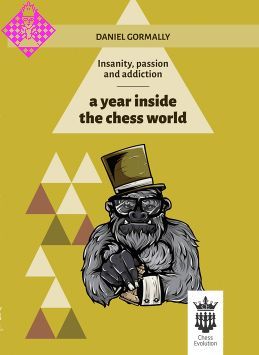 English chess Grandmaster Danny Gormally finds his life at a crossroads. Bored with Berlin defences, sick of the endless grind of the English chess circuit, he tries his luck on the European scene.

In this at times hilarious and tragic account, Gormally shares the inner workings of the chess world - a world riven with insecurities, strange social customs and petty rivalries, while casting his analytical eye even on topics as disparate as eccentric waiters, strange Amsterdam zoos and inspiring mountain passes. It’s a story you won’t want to miss.

007 Chapter One - The Narrow Path of Adversity

043 Chapter Two - The Lonely Life of a Chess Professional

139 Chapter Six - Rage against the Dying of the Light