The store will not work correctly in the case when cookies are disabled.
Artikelnummer
LXHILABHK
Autor
John S. HilbertPeter P. Lahde

The Man Chess Made 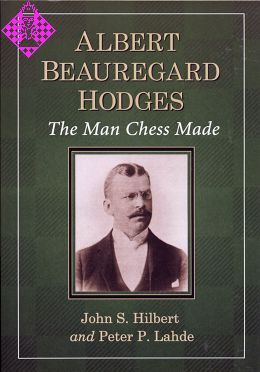 About the Book
Albert Beauregard Hodges is a legend among chess aficionados. One of the most well-known American chess players of the late 19th and early 20th centuries, he played an important role in transforming chess from a pleasant pastime into a social institution. This work provides an in-depth biography of Hodges’ personal life and chess career and a collection of 340 of his games, as well as 15 of his published chess problems. Hodges’ complete tournament and match records are included, along with line engravings, photographs, and several indexes.


John S. Hilbert is the author of a dozen books and more than 100 articles on chess history. He lives in Amherst, New York.
Former editor of Tennessee Chess News , Peter P. Lahde has written on Albert Beauregard Hodges, Alekhine, the Hastings tournaments, the modern United States Chess Championship, and chess in Tennessee. A retired research chemist, he lives in Nashville.

"a fitting tribute to the man and his time. Highly recommended"--IM John Donaldson (JeremySilman.com )

"Hilbert, is indisputably one of the world’s foremost chess historians and every new work of his arouses interest on the part of anyone fond of chess history...an important contribution to the knowledge of American chess history"--Quarterly for Chess History