The store will not work correctly in the case when cookies are disabled.
Artikelnummer
LXDUNGCBOTTCIE
Autor
Alex Dunne

Great Chess Books of the 20th Century in English 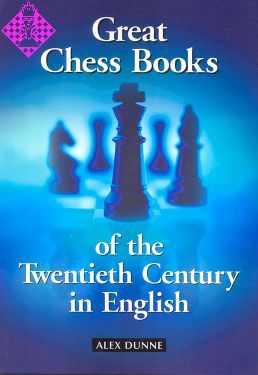 Among the first books ever published was the 1474 translation of the Game and Playe of the Chesse . Over the next 400 years, significant chess books would appear, but the overwhelming number of titles on the subject appeared in the 20th century and continue unabated. By 2003, over 35,000 volumes on chess in a variety of languages had been published, with approximately 14,000 English language works published from 1960 onward.

For the librarian, collector, or chess enthusiast, the immediate task comes in finding which of these many volumes are worthwhile. This work provides an objective and informative look at some of the best chess books published in the period 1901 through 2000-and gives numerous examples of the games, with diagrams that appear in them. Inclusion criteria were popularity, longevity, critical acclaim, influence, definitiveness, historical importance, authorship and reputation. All were published in English (or use figurine notation). Each entry includes bibliographic details followed by a description of the book, with information on the author or authors, why the book is important, and background information on the publication.

I have played chess and collected chess books since 1955. Like most chess players, I did not start off collecting chess books, rather I bought the books to study to improve my game. My game improved and I bought more chess books. After some years I soon had more books than I would ever read. I realized I had moved into another sphere - I had become a chess book collector. Once I realized that, I began collecting in earnest. I sought bargains. Whenever I went off to near-by cities for a chess tournament, I sought out used book stores. I went to rummage sales. I bid low and often on eBay. After a number of years, my collection had grown. I bought more bookcases. I used the computer to catalog my books. My collection had grown to over 1,100 volumes, plus a nearly complete run of the periodicals Chess Review and Chess Life. Inside Chess was complete. There were many other periodicals. It was a good collection. There were some rare items - a 1773 edition of Philidor (my wife thought it cost only $400: that was close, kind of), some almost one of a kind correspondence chess items, mimeographs for the U.S. Olympic team, a fair number of autographed copies, a large number of first editions. It was a good collection.

In mid-February 2003 I received a telephone call from Tim Riccardi. Tim had entered a team in the U.S. Amateur Championship in Parsippany, New Jersey. Their first board had taken ill and Tim wanted to know if I would take the board. Saturday morning my wife drove me to the Best Western in Sayre to meet with my new teammates for the trip to Parsippany. That evening we had two rounds of play. Our team scored 3 1/2 - 1/2 in the first round and 1/2 - 3 1/2 in the second. I went to bed late, only to be woken about 6:00 in the morning with a phone call on Tim's cellular phone. A terrible fire had burned down my house. My wife and grandson had died in the flames.

Tim drove me home, keeping a conversation going during those long hours of driving toward a personal horror. We drove up to the remains of my house. There was no one around. There was almost nothing standing, for the fire department had bulldozed the walls in to prevent the fire from spreading. It looked like a bomb site you would see on the news. I could walk up my front sidewalk to where the steps to my porch used to be. One more step would have taken me into charcoal and busted up pieces of some part of my house. All was lost.

Thanks to the Red Cross, friends, and family, I survived that week. By mid-March it was time to clear off the land. The bulldozers were brought in. I was there at the site. Occasionally the blade would churn up a section of the house and chess books would cascade down through the dirt and debris: dirty, sooty, filthy, smelly chess books. The bulldozers would stop. I would walk into the muck to try to retrieve what books or parts of books I could. All the books were covered in mud. Most had scorch marks on them, permanent shadows from another book photographed on the Covers. That week I had a nightmare: in it I envisioned the future apocalyptic day when the last two books were burning in a ruined world, a copy of the Bible and a tenth printing Reinfeld.

All told I managed to pile about three hundred mud books (but no Philidor) into the back of my car. Of those three hundred, about half were salvageable. My wife, my grandson, my house, my computers, all my records, so many old bookfriends, almost the entirety of my past, gone.

I would have to start over.

I thank my friends, neighbors, and the American Red Cross. I also thank the chess community who offered comfort and aid, with condolences coming from everywhere in the United States and from Russia, England, Brazil, Romania, Hungary - everywhere. Some generously contributed money, which has gone into a chess scholarship program. I would like to especially thank the following who contributed books to the rebuilding of my library: Ted Greiner, Anthony Saidy, Gary Good, Marty Erway, Gerard Dullea, the Allentown Chess Club, Neil Brennan, Robert Nunnally, Robert Tanner, J. Franklin Campbell, Joan DuBois, and Ira Riddle. Thanks to all of you and many more. Thank you to my community who gathered about me when I needed them. Thank you to my family: my son, my brother, my sister who helped my daughter and me in this dark time. And thank you to that greatest of games, chess, where there are no accidents and truth lies on the board waiting to be discovered, where I can escape from time to time from the sea of overwhelming troubles.