A Biography with 220 Games 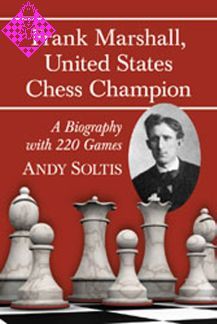 About the Book
Frank Marshall (1877-1944) reigned as America’s chess champion from 1907 through 1936--the longest stint of anyone in history. A colorful character almost always decked out in an ascot and chewing a cigar, his career coincided with many evolutionary changes in competitive chess.

Marshall was a master gamesman. He took up the game of salta, akin to Chinese checkers, and was soon world champion. But more than anything, he loved chess, claiming that after he learned the game at 10 he played every day for the next 57 years. Marshall’s life and playing style are fully examined here, including 220 of his games (some never before published) with 190 positional diagrams.

About the Author
Grandmaster Andy Soltis, eight times champion of the Marshall Chess Club, New York Post editor and Chess Life columnist, is the author of dozens of chess books. He lives in New York City.

"this biography and catalog of Marshall pays off handsomely for chess enthusiasts...the games themselves...ably described by grandmaster and chess journalist Soltis...are the soul of the book"--Booklist/RBB