The store will not work correctly in the case when cookies are disabled.
Artikelnummer
LXKARAB2
Autor
Tibor Károlyi 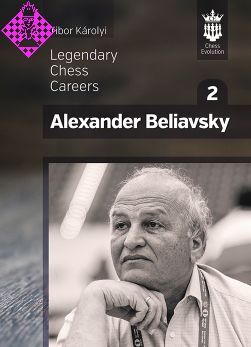 In this book, the author drives you through the very rich chess career of Alexander Beliavsky while interviewing hirn. This unique concept makes the book easy to read and gives the reader some inside information about what is happening also off the board, things you normally don't get to know about.

Alexander Beliavsky is one of the most respected fighters in the chess world, whose peak times ran from the 1970's through to the 1990's when during which period he was 4 times Soviet Champion - a feat exceeded only by the great patriarch Mikhail Botvinnik.

With the Soviet national team he was a 3-time Olympiad winner and several times European Team Champion and European Cup winner. His most successful period came at the end of the eighties, finishing third behind Karpov and Kasparov in the GMA World Cup series. He also won a few super- tournaments, including Tilburg and Wijk aan Zee, before moving to the Siovenian Federation where he played successfully for their national team.

His career as a trainer is rich too - coaching Garry Kasparov, then raising some of the most successful young stars of the 21st century such as Vachier-Lagrave, Gashimov, Naiditsch and Rapport among others.

Beliavsky made a great impression upon me as a youngster. At the board he was stoic, extremely proper and correct, never disturbing the opponent. A very correct and most formidable opponent!