All About Life and Death 2 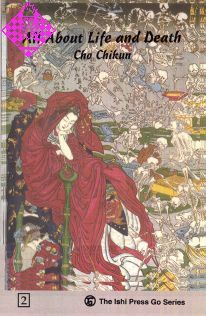 The most complete work on tsumc-go ever published in English

Life and Death is a critical subject area for go players. Cho leads the reader through all of the important patterns that occur in play. Because of the vast range of material included, beginners will profit from the book, while experts will still find a challenge.

For beginners through dan-Ievel players

Volume 2 analyzes the 'carpenter square', shapes on the sides

and corner shapes arising from josekis and attacks on corner enclosures.

About the Author: Cho Chikun is the foremost Korean practitioner of the Game of Go. He began his professional study at the game of six, becoming the youngest-ever professional at 11. At the age of 24, he won the prestigious title Meijin, and is the only go player ever to have held all top four Japanese titles at the same time. Cover illustration: The Courtesan of Hell dreaming of skeletons at play. A comical ukiyo-e print by Gyosai (1874). From the Ishi collection.

001 Life and Death on the Second Line

033 Six-Space Eye Shapes in the Corner

079 Eight-Space Eye Groups in the Corner

211 Second Une Shapes on the Side

241 Third Line Shapes on the Side

273 Fourth Une Shapes on the Side