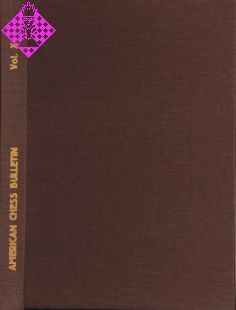 The hallmark of the ACB was always a canny blend of high-quality tournament and match reports, combined with an exhaustive coverage of U.S. and overseas chess news. What distinguished it particularly, however, was its pithy commentary on the chess scene. In the on-the-spot report from the Havana tournament, won by Marshall just ahead of local hero Capablanca, the editors give a tremendous picture of the atmosphere on the final day's play. There is also a personal memoir of "Wilhelm Steinitz, Genius" by Robert J. Buckley, in which the tragedy of the principled but eccentric great master's life is told with some affection: "During the Paris tourney of 1867, in a trifling dispute, he spat on his opponent, an English player, who promptly knocked his head through a window, the subsequent extrication a sight for the gods." Other episodes include Steinitz accosting Buckley in the lobby of the Hastings Queen's Hotel with the words, "How dare you say Lasker would beat me?"