The store will not work correctly in the case when cookies are disabled.
Artikelnummer
LOEMMAS
Autor
John EmmsRichard PalliserPeter Wells 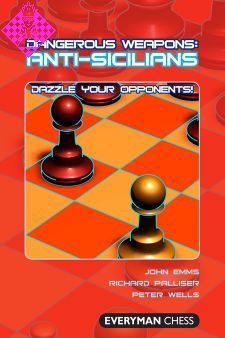 Do you need to freshen up your opening repertoire? Choose Dangerous Weapons and amaze your opponents with new and exciting opening ideas!

In this book, John Emms, Richard Palliser and Peter Wells take a modern look at a popular group of openings: the Anti-Sicilians. Instead of travelling down the well-trodden paths of the main lines, the authors concentrate on fresh or little-explored variations, selecting a wealth of 'dangerous' options for both colours. Whether playing White or Black, a study of this book will leave you confident and fully-armed, and your opponents running for cover!

Dangerous Weapons is a series of opening books which supply the reader with an abundance of hard-hitting ideas to revitalize his or her opening repertoire. Many of the carefully chosen weapons are innovative, visually shocking, incredibly tricky, or have been unfairly discarded. They are guaranteed to throw even your most experienced opponents off balance.

Preface Anti-Sicilian systems continue to be a source of comfort for White players who want to avoid the ever-growing theory of the main lines, and conversely a pain in the neck for those playing Black whose only real wish is to reach the Najdorf, Dragon, Scheveningen or Sveshnikov (or whatever their favourite Sicilian varia­tion is) in every single game they play.

I hope that this book will provide some attractive options to both players: bold possibilities for Black against some of White's more popular Anti-Sicilians, and also weapons for White to try, aiming to shock and confuse opponents.

I would like to thank my co-authors Richard Palliser and Peter Wells for all their hard work on this project; not only for their own articles, but also for their enthu­siasm to discuss and analyse other possibilities. As usual a number of ideas even­tually had to be discarded, often reluctantly so. One typical reason for disqualifi­cation was if a 'weapon' seemed to provide more danger to oneself than the op­ponent!