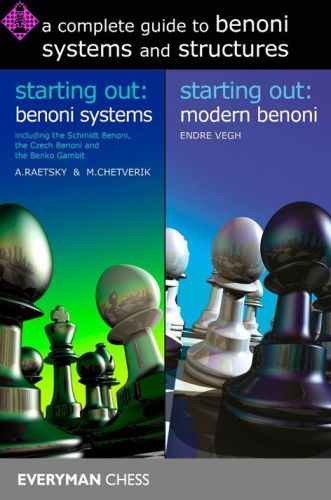 Two great books from the Everyman Chess Library, Starting Out: Benoni Systems by Alexander Raetsky and Maxim Chetverik and Starting Out: The Modern Benoni by Endre Vegh, brought together in one volume.

Starting Out: Benoni Systems is a study of all the crucial Benoni systems apart from the Modern Benoni. It presents diverse and practical options against the queen's pawn opening for dynamic, tactical players and solid, positional players alike. Included are such daring defences as the controversial Blumenfeld Counter-Gambit and the Benko Gambit, a favourite with uncompromising Grandmasters such as Veselin Topalov and Vassily Ivanchuk. On the other hand, Black also has the opportunity to adopt solid, respectable defences such as the Czech Benoni and the Schmid Benoni.

The Modern Benoni is one of Black's most ambitious and audacious defences to the queen's pawn opening, and it has been used with devastating effect by such legends as Mikhail Tal, Bobby Fischer and Garry Kasparov. From the very start Black creates an exceptional imbalance in the position, one which leads to dynamic play and gives Black real chances to seize the initiative. Both players must be fearless in their approach, as hesitation in the Modern Benoni often leads to disaster! In this user-friendly book, International Master Endre Vegh goes back to basics, studying the fundamental principles of the Modern Benoni and its many variations. Throughout the book there are an abundance of notes, tips, warnings and exercises to help the improving player, while key strategies, ideas and tactics for both sides are clearly illustrated.

115 4 The Blumenfeld Gambit and Volga/Blumenfeld Hybrids

134 5 The Czech and Closed Benonis

005 1 Introduction to the Modern Benoni