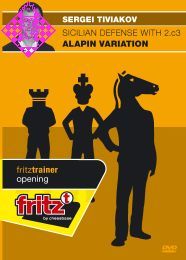 I started playing the line 1.e4 c5 2.c3 in the Sicilian Defense as White in 1988. Since then I have employed it in more than 100 games, achieving a high performance score. My personal peak were the years 2005 - 2006, when I managed to win twelve 2.c3-games in a row. Yet I also know the other side of the coin – countless times I had to face this opening with Black when the opponents wanted to avoid my Dragon, for example during the World Candidates Match against Adams in New York in 1994. White tries to occupy the centre with a second pawn, and Black must know his stuff very well in order to be able to equalize. And this is only possible with 2...Nf6 – all other lines give the . rst player a small edge everywhere. Especially against stronger opponents, 2.c3 is an excellent weapon. If White doesn‘t risk anything, he cannot

lose! Controlling the game, he can always make a draw from a position of strength. In contrast, playing for a win with Black is always connected with a extremely high risk, and we have seen many games when much higher rated players were completely smashed by White. In comparison with the main lines of the Sicilian, there is much less theory to study – and yet a lot of room for improvement for both sides. Video running time: 4 hours. See you too – with 2.c3!