complete repertoire in a famous opening 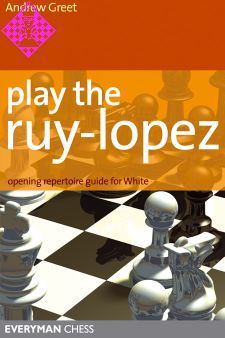 The Ruy Lopez is an incredibly popular opening at all levels of chess; this is perhaps unsurprising given that it’s recognized by most experts as White’s greatest chance of obtaining a lasting advantage after the moves 1 e4 e5. Also known as the Spanish Opening, the Lopez is steeped in rich tradition, having provided the battleground for countless clashes between World Champions of past and present: Kasparov, Fischer, Karpov, Topalov, Kramnik, Anand - the list is endless!

Given its immense popularity, one issue a prospective Lopez player has to face up to is the mountain of theory that has gradually developed over the years. In this book, however, Andrew Greet circumvents this potential problem by advocating a comprehensive and yet concise repertoire for White, one that can be assimilated into an opening armoury with relative ease. He also covers thoroughly the typical tactical ideas and strategies for both White and Black, arming the reader with enough knowledge to begin playing the Ruy Lopez with confidence in his or her own games.

is a young International Master, a former British Junior Champion, and is one of the UK’s most rapidly improving players. In 2005 he scored a perfect 11/11 in the British National League, the first time any player had achieved this remarkable feat. He is also an experienced coach and writes regular articles for CHESS .

It is not by chance that nearly every great player, from past until present, has incor­porated the classical move 1...e5!, somewhere into his repertoire, as a response to 1 e4. Along with the Sicilian, it offers arguably the best prospects for an equal game.

As a life-long king's pawn player, I have long held the view that White's best op­tion against this robust defence is to have a variety of weapons at his disposal, which is why, at various times, I have employed the Italian Game, the Four Knights, the Vienna and the King's Gambit. Garry Kasparov, while sharing my interest in the Italian Game and even the Evans Gambit, has tended to prefer different avenues, and in doing so has deeply enriched the study and understanding of the Scotch. Fascinating though these openings are, the staple choice of any 1 e4 player should always be the venerable Ruy Lopez, or Spanish Game - as it is usually known on the continent - if he wishes to obtain a long-term advantage.

Since the advent of databases and analysis engines, opening theory has increased exponentially. Having just suggested that you, dear reader, might wish to explore a large number of other king's pawn openings, it would be negligent and irresponsi­ble were I not to mention that the Ruy Lopez by itself has become a vast labyrinth in which not only the indolent and unwary get lost, but even, on occasion, the most dedicated of professionals. It is Andrew Greet's difficult task to guide you through this complicated maze.

Andrew's principal recommendation is 5 Qe2 - the Worrall Attack. I suspect that its primary attraction to the author is that it is a shortcut - bypassing a whole range of variations. Indeed this is exactly what attracted me to it in the first place when, at a very tender early age, I saw local legend Jeff Horner playing it at Bolton Chess Club. I believe that I was dimly aware that Alexander Alekhine had sometimes played the Worrall, but it was the sight of this move physically appearing on the board, in my home environment, which really inspired me. Jeff is not at all well known internationally, never having gained the IM title, but he has won countless tournaments in the Northwest and had a substantial Elo rating of 2450 back in 1974, in an era when this actually meant something. The advantages of the Worrall are manifold: firstly, one can immediately stop worrying about the Open Variation of the Lopez, an uncompromising defence favoured by Euwe, Korchnoi, Yusupov and others. Secondly, one need not fear the Marshall Attack, that most resilient of draw­ing weapons, as the modest but nevertheless potent 8 d3, maintaining the tension, can be safely essayed. Thirdly, one can sometimes manoeuvre the queen's knight to g3 before castling kingside, which might save a tempo or even two if you are very lucky (one might also, a la Steinitz, castle queenside in certain unusual circum­stances). Fourthly, White's rook can be deployed on the active square d1 in a single move (although later I would discover that, more often than not, this rook belongs on e1).

My interest in the Worrall waned when I became seduced by 5 d4, the Centre At­tack of the Ruy Lopez or CARL as it is sometimes known, which was shown to me by the Lancashire Junior Coach, Mike Conroy. I had a whole string of good results with this offbeat line until I suffered a painful defeat at the hands of Viktor Korchnoi at the Phillips and Drew Tournament in 1980. As successful as I had been with this tricky variation, I got the feeling that it was a cul-de-sac - a well-chewed piece of meat that, if Black actually knew what he was doing, there was simply no possibility for White to improve. My Spanish excursions then proceeded via 5 d3, a close rela­tive of the Worrall, before eventually coming onto the main line.

The Worrall was, if not exactly forgotten, then pushed to the back of my mind -at least, that is, until I was paired to meet Anatoly Karpov in the Candidates Semi-Final of the World Championship in Linares, Spain, 1992. As part of my preparation I gave a great deal of thought to the Ruy Lopez. How on Earth was I to topple this giant of the game - a man with vast experience and sublime skill on both sides of this opening? The direct approach would be to familiarize myself with his favourite systems, study the latest games, and search for novelties. That is exactly what most people would do and, in the absence of a decent alternative, would have been exactly what I would have chosen. The indirect approach was to entice a man in his forties, who was very settled in his ways, onto less well-known territory; to compel him to think for himself, there and then at the board, under the pressure of a ticking clock, rather than fly, at his comfort, on autopilot. In particular I wanted a system which he had not faced in any of his world championship matches and therefore as a consequence would not have spent dozens if not hundreds of hours analyzing. Surprise in itself was not enough: I needed a sufficiently sharp and durable weapon to survive the rigours of a ten game match, i.e. potentially five games.

I could only find one thing that fitted the bill: my old favourite, the Worrall. I invited the Indian genius Viswanathan Anand to Athens, to assist me in my analysis. With a little more confidence Vishy would have defeated Karpov in the Candidates Quarter-Finals, but due to inexperience he had let his advantages slip. Now he was helping me. I discovered that our philosophical musings had run along remarkably similar lines and that he was in total agreement with my intended approach.

The opening appeared twice in the match. In game six, things did not go entirely to plan and I found myself in grave danger of being strategically outplayed. Sensing the drift, I made a very cunning and correct choice to refrain from capturing a pawn on the nineteenth move. The unexpected turn threw Karpov. He had been expecting to obtain a monstrous bind, but now I was wriggling hard for counterplay. Try as he might, he could not control my activity. On the 25th move, already in a clearly worse position, the former World Champion made a grotesque blunder, losing his queen and the game on the spot. To many observers, such as Susan Polgar, this was incomprehensible, but what she and others failed to understand was that mistakes come under pressure and rarely in isolation. He had been thrown off balance ini­tially by my choice of opening, as he had in previous games in the match. Just as he was anticipating gaining the upper hand, he was psychologically disturbed by a sudden changing of the position. Unable to fully adjust to the new circumstances, he made the elementary mistake while searching for that elusive equality.

Game eight was critical for the entire match. Defeat for Karpov in this game would put him on the brink of disaster. On move seven, wondering what improve­ment I might have in store, Karpov stared long and hard at my second, Lubomir Kavalek, who was seated prominently in the front row of the audience. Kavalek stared back inscrutably as ever. Returning his gaze to the board, the Russian paused for a moment before varying with 7...d6. On move thirteen we reached a position which was very familiar to the young analysts in Athens. We were fully aware that 13...b4 was the critical continuation, but we had also considered carefully what Kar­pov, the man, might play. We thought it most likely that he would capture my a-pawn, and we fell about laughing at this prospect, as we considered this to be a pretty bad move. Sure enough, when the moment arose he duly captured as ex­pected. The key idea was Vishy's 18 Na2!, which was obvious enough - but only when you had seen it - removing the linchpin of Black's position. I won in very good style and I consider it one of the best games of my career.

I will let you into a little secret: objectively speaking, Andrew's book is not the complete answer to White's search for a guaranteed opening advantage. That should not worry you though. The most important thing, at any level, is to know more than your opponent. By studying this book and understanding the ideas, and not just attempting to remember precise sequences of moves, you will be very well placed. Please enjoy it!

Part One: Variations without 3...a6