The store will not work correctly in the case when cookies are disabled.
Artikelnummer
LGYOSGGPFB01
Autor
Kano Yoshinori 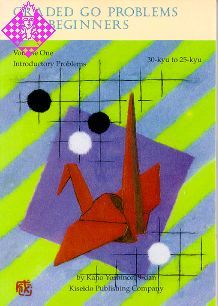 are the ideal books for players who have just learned the rules of go, bridging the gap between a beginner's book and some of the more 'advanced' elementary books.

The almost 1,500 problems these four volumes contain thor­oughly drill the reader in the fundamentals of the game. Once he has finished studying these four books, he will have mastered the elements of capturing and defending stones, life and death of groups, elementary tactics, the opening, and the endgame, thus lay­ing a solid foundation for his future progress in the game.

At the time I wrote Go Proverbs a little over 20 years ago, my aim was to promote Go in Britain. The book is the fruit of countless hours on the part of a dedicated group of like-minded individuals. Created long before the general use of computers, proofreading, spell checking, and formatting were all done by hand. Each stone had to be cut out and stuck to the diagrams, which were then photographed. I am indebted to (among others) Alison Cross and her typing skills on an IBM golfball typewriter, and John Tilley's work in the darkroom developing the pictures and sizing them for the page.

My family and I live in Australia now. When not working or spending time with my family, I still play Go. I hope that the reprint of this book will continue to promote Go, not only in Britain, but all over the world. Royalties will be used by the BGA to teach and to promote Go.

v HOW TO PLAY GO

01 I INTRODUCTORY PROBLEMS LEVEL ONE